A screenshot of a purported WhatsApp chat thread has been shared hundreds of times in multiple posts on Facebook and Twitter that claim it contains an image of inspectors in India seizing dog meat intended for restaurants in Mumbai. The claim is false; the image, which has circulated online since November 2018, actually shows police at a railway station in southern India seizing meat that officials later identified as goat meat.

The screenshot was published here on Facebook on November 26, 2019. It has been shared more than 800 times. 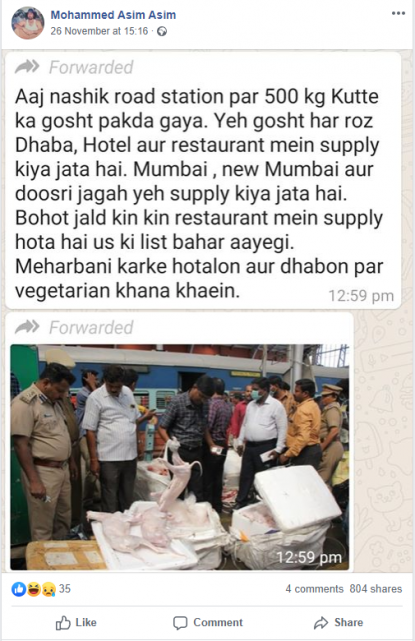 The Hindi-caption, written phonetically in the Roman alphabet, translates to English as: “Today, 500 kilograms of dog meat was found at Nashik station. This meat is supplied every day in eateries, restaurants, and hotels in Mumbai nearby areas. A list of such places, where this meat is supplied, will come out very soon. Please eat vegetarian food in hotels and restaurants.”

Nashik is a city in the western Indian state of Maharashtra roughly 167 kilometers north of Mumbai, Maharashtra’s capital city.

All the claims are false; the photo in the WhatsApp screenshot actually shows police at a railway station in Chennai, Tamil Nadu seizing meat that health officials later identified as goat.

“We sent the meat for lab tests and waited for a report, and the report revealed that it was goat meat and not dog meat as misrepresented by media,” Dr. R. Kathiravan, a Designated Officer at the Tamil Nadu Food Safety & Drug Administration Department, told AFP by phone on December 11.

A reverse image search on Google also found this Tamil-language news report published on November 22, 2018, that features the same image as the one used in the misleading posts.

The headline, translated to English, reads: “It is not dog but goat meat, claims forensic results.” 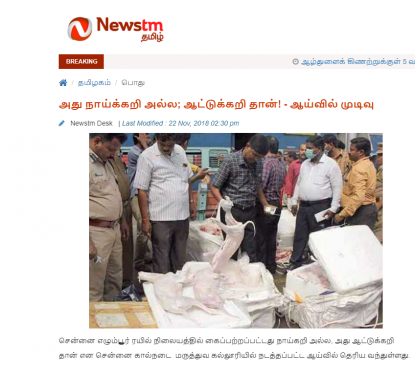 Bangalore-based news outlet The News Minute reported the incident involved dog meat here on November 17, 2018 but five days later, it published this article clarifying that officials determined the seized meat was sheep or goat, not dog.

“We never said it was dog meat, it was a media speculation,” Kathiravan stated.

The Hindu, a major Indian newspaper, also published a story on the expert’s findings here on November 23, 2018.