A Facebook post by the National Rifle Association claims that Democratic presidential candidate Joe Biden responded “Bingo!” when asked if he would “take away guns.” This is misleading; he was specifically referring to assault weapons, and said there is “no legal way” to take those that people already own.

The post -- which has been shared thousands of times -- features an image of Biden along with the text: “CNN anchor: Are you going to take away guns? Joe Biden: ‘Bingo!’” 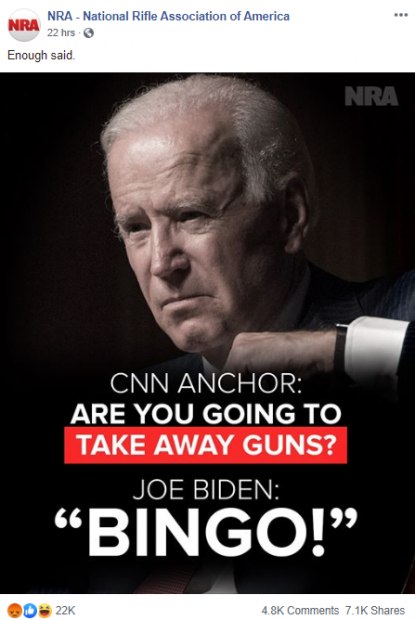 The post misrepresents Biden’s remark, which he made in an interview with CNN anchor Anderson Cooper that was broadcast in August 2019.

Cooper asked him about gun owners who are concerned that “a Biden administration means they’re gonna come for my guns.”

“Bingo, you’re right, if you have an assault weapon. The fact of the matter is they should be illegal, period,” the former vice president responded.

He went on to say that he would institute a national buyback program, but “that’s not walking into their homes, knocking on their doors, going through their gun cabinets, etc.”

“Right now, there’s no legal way that I’m aware of that you could deny them the right if (they) had legally purchased them, but we can in fact make a major effort to get them off the street and out of the possession of people,” Biden said when asked if people could keep weapons they already have.

When he was Barack Obama’s vice president, Biden led the administration’s ultimately unsuccessful push for a plan to curb gun violence after the massacre of 20 children and six adults in Newtown, Connecticut, in 2012.

The plan included a call for a reinstated ban on assault rifles, an effort to close background check loopholes, and limits on magazine capacity -- measures that Biden is again pushing for now.

Biden’s campaign website describes gun violence as a “public health epidemic” and outlines steps he would take on firearms if he wins the presidency.

Among those is a requirement that assault weapons already in circulation be either registered under the National Firearms Act -- as is currently the case for silencers, short-barreled rifles and automatic firearms -- or sold to the government.

He also wants to ban the manufacture and sale of assault weapons and high-capacity magazines.

America is plagued by frequent gun violence, but little action has been taken at the federal level to curb it, with the National Rifle Association lobbying heavily against gun control measures.

Nearly 40,000 people died from firearms-related injuries in the United States in 2017, according to the most recent data available from the Centers for Disease Control and Prevention.

While mass-casualty attacks involving military style rifles grab headlines, handguns are the most common type of firearm used in homicides in the United States, according to statistics released by the FBI.