An image of women wearing burqas and holding their identity cards has been shared thousands of times on Sinhalese-language Facebook pages alongside claims that “these people” are roaming Sri Lanka freely. The post was uploaded one day after deadly Easter Sunday bomb attacks in Sri Lanka. The photo is actually an AFP image showing women going to vote in Afghanistan’s 2009 elections.

The posts, for example this one which has been shared more than 14,000 times since it was posted April 22, 2019, contains a photo of five women in burqas holding their identity cards in their hands.

The post’s caption says in Sinhalese: “We can’t go to an ATM wearing a cap, but these people are roaming the entire country wearing these sacks.”

The Sinhalese text across the bottom of the image says: “Devils, at least now ban these sacks. They give every ‘game’ using this attire.”

The post was uploaded one day after a series of attacks on churches and hotels in Sri Lanka on Easter Sunday left more than 250 people dead. Here is an AFP report on the bombings. 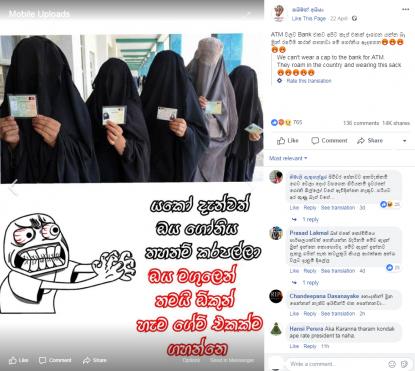 Multiple comments on the post indicated that Facebook users believed the photo showed the situation in Sri Lanka.

“I don’t want to be crazy. Let’s ban this after a lot of sinhala people died,” one user wrote.

“Why’s hiding behind that this’s not respect for the rest of people living in Sri Lanka,” another user commented.

A reverse image search on Google led to this AFP photo from 2009 Afghanistan Presidential elections.

Below is a screenshot of photo on AFP’s Image Forum website:

The photograph was taken on August 20, 2009 by AFP photographer Banaras Khan.

The post’s caption says: “Burqa-clad Afghan women show identification cards as they wait to cast their votes at a school converted to a polling centre in Kandahar on August 20, 2009. Polling stations opened for the second ever presidential elections in Afghanistan, held under tight security amid Taliban threats to disrupt voting.”