No, this video does not show school children paying their respects to an army soldier from India

A video has been viewed thousands of times in multiple posts on Twitter and Facebook alongside a claim it shows schoolchildren paying their respects to a soldier in India. The claim is false; the video has previously circulated in news reports about an incident in Sri Lanka; multiple elements in the footage -- including the soldier's uniform and the transparent bags carried by the children -- show it was filmed in Sri Lanka.

The video, which is one minute 17 seconds long, was published in this Facebook post on June 5, 2019, where it has been viewed more than 300 times.

It shows young girls and boys in school uniforms greeting and touching the feet of a soldier.

Touching an elder’s feet is a gesture of respect observed in some South Asian countries. 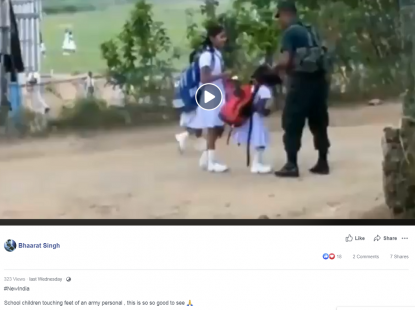 The caption states: “#NewIndia. School children touching feet of an army personal, this is so so good to see.”

“#NewIndia” refers to a campaign by the government of Indian Prime Minister Narendra Modi.

The same video was published with an identical claim in this post on Twitter, where it has been viewed more than 16,000 times.

The same video was viewed hundreds of times after being shared on Facebook here, here and here with a similar claim.

The claim is false; the video has previously circulated in news reports about an incident in Sri Lanka.

Through a combination of reverse image searches and keyword searches, AFP found a longer version of the video published on a Sri Lankan Facebook page here on May 30, 2019.

The Sinhala caption translates to English as: "Wonderful work dear children. You all are disciplined children of decent parents. Your future is clear. You will never go wrong in the future. Our salutes to the brave war heroes who are protecting your motherland and you. We are in debt to you. Our heartfelt thanks to the videographer of this scene so we could explain this to the people of this country. We feel bad for those who care for this country…"

The video in the misleading posts corresponds with the video published by the Sri Lankan Facebook page from the 24 second mark until the end.

Below is a screenshot comparison of the video in the misleading posts (L) and the video on the Sri Lankan Facebook page (R): 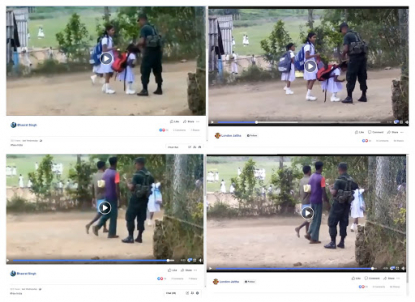 Another reverse image search found this video published on May 30, 2019 by the official Facebook page of Sri Lankan television channel Hiru news.

The video’s Sinhala caption translates to English as; “Expressing gratitude to war heroes”.

Hiru news shared a shorter version of the same clip on its verified YouTube channel here on May 31, 2019.

The video’s Sinhala narration translates to English as: “Security forces took steps to strengthen security in schools following security concerns that arose in the public mind following the Easter bombings. In a voluntary reaction to the way security personnel lined up to cast away any feelings of fear in young minds, seen here are the salutes of some school children, captured through a mobile phone camera…”

“The Easter bombings” refers to attacks on churches and hotels in Colombo on April 21, which left at least 257 people dead. Here is an AFP story about the attacks.

The video contains multiple identifying features which help verify it was filmed in Sri Lanka.

The video shows some of the school children carrying transparent bags.

Below is a screenshot of children carrying the transparent bags, which are circled in yellow: 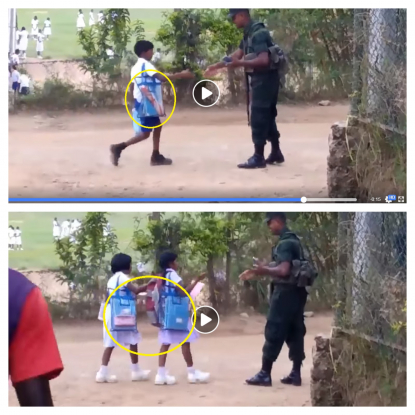 School administrations asked students to bring their belongings in transparent bags, as a security measure when schools re-opened on May 6, 2019, two weeks after the Easter Sunday bombings.

This report published by The Guardian on May 12, 2019, states: “Students at state-run schools resumed classes last week. Campuses were guarded by police, and parents asked to replace school bags with clear plastic sacks. Attendance remains low.”

The style of the soldier’s fatigues in the video in the misleading posts also corresponds with recent photos of Sri Lanka soldiers in uniform, for example this AFP image taken May 15, 2019.

The video in the misleading posts also shows a green auto-rickshaw, or tuk tuk, displaying a Buddhist flag at the 19 second mark.

Below is a screenshot of the video at this point, with the Buddhist flag circled in yellow: 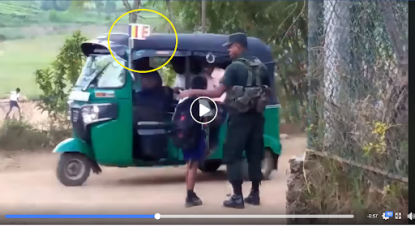 Screenshot from the video where a tuk-tuk is seen driving by, displaying a Buddhist flag

The style of the green tuk tuk corresponds with other photos of green tuk tuks in Sri Lanka, including this one on AFP Forum taken in August 2017.

In Sri Lanka, Buddhist flags are usually displayed around Poya days, the Buddhist celebration of the full moon. The most significant such day for Buddhists, known as Wesak, was observed on May 18 this year.

The video appeared in Sri Lankan media reports in late May 2019.