No, this video does not show piles of cash seized at a Pakistani politician’s house

A video has been viewed more than a million times in multiple online posts that claim it shows a large stash of money seized at a Pakistani politician's house. The claim is false; the video shows an art installation that was displayed in Madrid in February 2018. The video has also surfaced in other countries alongside similar claims that the money belongs to local politicians.

Multiple Facebook posts, for example this one published March 11, 2019, and viewed more than 410,000 times since, contain a video that appears to show a room filled with large piles of cash, some of which has been burnt.

The post's caption says: "These scenes are not from any bank's vault, but are of currency recovered from the basement of house of People's Party leader and Speaker Sindh Assembly Agha Siraj Durrani." 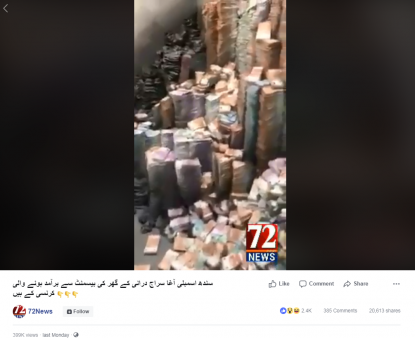 The Pakistani politician mentioned in the post, Agha Siraj Durrani, is under investigation for corruption. Major Pakistani media outlets have reported on his case, for example here in the Express Tribune and here in Dawn. These reports do not mention the discovery of a large amount of cash.

The same video was posted on Instagram here on February 27, 2019 by a user called Alejandro Monge, who is an artist based in Spain, according to his website here.

The Instagram post's caption, in Spanish, refers to the rapid spread of misinformation online and says the 500-euro notes seen in the footage were painted by hand.

The caption says, in part: "It's one of the things about the internet that something can go viral without knowing why it does… and then nobody knows what it is or who it is from".

It also says: "If people knew what a sculpture is and knew the tickets are painted by hand… @monge-art share!!"

AFP contacted Monge, who said in an email, translated into English:

"The video was taken by a visitor to the ArtMadrid art fair in 2018 and a Dutch website published it without mentioning anything, so the decontextualised video was perfect for fake news websites around the world, we know it has been used in Haiti, Russia, Cameroon, Spain and Pakistan with different news stories linking it to local politicians.

"The sculpture was published on my Instagram page a year ago, including documenting the whole production process.

"The sculpture is made of resin and wood and the bills are coloured by hand with colouring pencils." 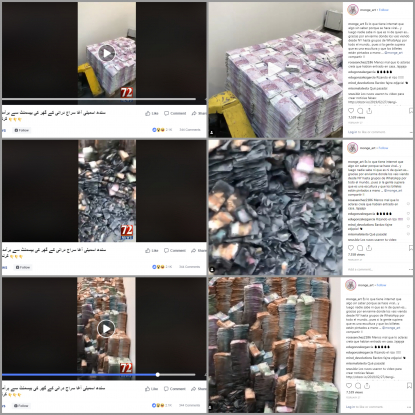 Monge's installation, titled "The European Dream 2", was displayed at the 2018 ArtMadrid contemporary art festival, which ran from February 21-25, 2018, according to the festival's online catalogue here.

Marta Suarez-Mansilla, deputy director at ArtMadrid, told AFP by email: "We can certainly confirm that this artist participated in our former edition of Art Madrid Contemporary Art Fair".

She added:  "Last year, the art fair took place from the 21st to the 25th of February 2018, and Alejandro Monge was represented by the gallery '3 Punts Galeria'. The exclusive artwork that he presented at the fair was 'The European Dream 2'"

The exhibit was also reported on at the time in this online video article published by regional daily newspaper Heraldo de Aragon on February 20, 2018.

Monge posted multiple photos and videos of the artwork on Instagram in February 2018 from different angles, showing how it was made, and of media coverage of the exhibition, for example here, here and here.

The image below contains screenshots of four of his Instagram posts showing the installation: 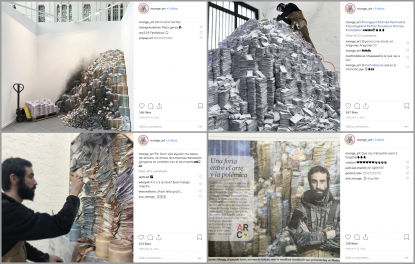 The same video of Monge’s work has been used to make similar false claims in other countries.

For example, Facebook posts like this one carried the same video in the context of a claim that the wife of a politician in Cameroon tried to burn 60 million pounds sterling to prevent police from finding it.