No, this video does not show the Nigerian vice president’s helicopter crashing

A widely shared video claims to show a helicopter carrying Nigerian Vice President Yemi Osinbajo crashing in the central state of Kogi. Osinbajo’s helicopter did crash on February 2, but this is not a video of the accident -- it’s footage of a Malian army helicopter crashing on January 19.

On February 2, Osinbajo’s spokesman confirmed that the vice president’s helicopter had crashed upon arrival in the town of Kabba in Kogi, where he was due to campaign ahead of Nigeria’s presidential elections on February 16. Osinbajo and all of the crew were safe, spokesman Laolu Akande said on Twitter. He also posted a picture of the aircraft after the accident, showing damage to its underbelly.

VP Osinbajo's Chopper crash lands in Kabba, but he and the entire crew safe. He is continuing with his engagements and plans for the day in Kogi State.

The Chopper after the incident. pic.twitter.com/WGzq72AOo3

Later that evening, a video posted by a Facebook page named “Informationloaded.com” claimed to show footage of the crash, with a caption saying: “Watch the moment Vice President Osibanjo’s helicopter crash-landed today in Babba Kogi State.”

The dramatic footage, which shows a helicopter crash-landing and screaming children running from the scene, has had around 34,000 views on the Informationloaded.com page and has been shared more than 2,000 times. 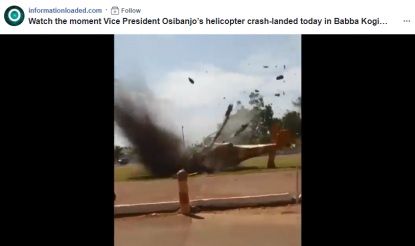 A screenshot taken on 14 February, 2019 of the misleading post on informationloaded.com

But it’s not Osinbajo’s helicopter. You can see clearly that the helicopter in the video is painted in camouflage colours, unlike Osinbajo’s, which was white.

A private company called the Caverton Group also said Osinbajo was using its charter helicopters while travelling on the campaign trail.

It confirmed on the day of the crash that one of its Augusta AW139 helicopters was “involved in a mishap on landing in Kabba”, blaming “unusual weather conditions”.

A day later the Caverton Group tweeted that Osinbajo was continuing to use its aircraft after the accident in “a true statement of our commitment to safety and professionalism”.

It posted a picture of the white helicopter used by the vice president.

A true statement of our commitment to safety and professionalism the Vice President Professor Yemi Osinbajo continues his campaign flying with Caverton. #safetyfirst #trueleader #proudlynigerian pic.twitter.com/XeAiSnQEnO

The video of the camouflage helicopter crashing actually dates back to an accident in Mali on January 19.

It appeared on Malian social media pages the same day; searches using InVid, an online video verification tool, and other reverse image search tools found no version of the video posted before that date.

And a senior Malian army official, speaking on condition of anonymity, confirmed to AFP that the video showed the crash in Kati.

Mali’s defence ministry had confirmed in a statement posted online on February 19 that one of its helicopters had crash-landed at a military field in Kati, just north of the capital Bamako. The crew were safe, the statement added.