No, this video does not show a Hindu attacking a Muslim for raping a girl in north India

A video has been viewed tens of thousands of times in Facebook posts that claim it shows a Hindu man stabbing a Muslim youth with a knife in broad daylight on a busy street in the north Indian state of Uttar Pradesh for raping a girl. The claim is false; the video is actually from the southern Indian city of Hyderabad, where two Muslim men attacked the victim with knives for marrying their sister against her family’s will.

A caption alongside the video in Hindi says:

“Now, there has been #justice… A #Hindu lion stabbed the whole body of a pig who had raped an eight year old girl in Barabanki in the middle of the road…! The day we will hit the road taking weapons in our hands, all the atrocities against innocents will end on that very day. #Longlive_Hindu_lion #Weapon_shall_triumph"

The Hindi word “सूअर”, translated as “pig”, is a derogatory term used to refer to Muslims. Eating pork is forbidden by Islam. 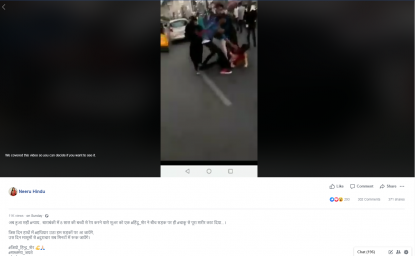 The video was also shared elsewhere on Facebook, for example here, here and here with a similar claim.

The claim is false; the video is not from Barabanki. It actually shows an incident in the southern Indian city of Hyderabad, in which two Muslim men attacked a Muslim youth with knives for marrying their sister without approval from the girl’s family.

In the misleading video, male voices can be heard speaking in Telugu, a regional language spoken mainly in the Indian states of Andhra Pradesh and Telangana; here is a dictionary definition.

In Barabanki, people generally speak Hindi; here is the website of a regional Hindi-language newspaper.

The use of this regional language in the clip, as well as key visual features outlined below, indicate the footage was actually filmed in Hyderabad, the capital city of Telangana.

A Google search using the keywords “knife attack in Hyderabad” led to news reports here and here published on June 8, 2019.

Below is a screenshot of that report: 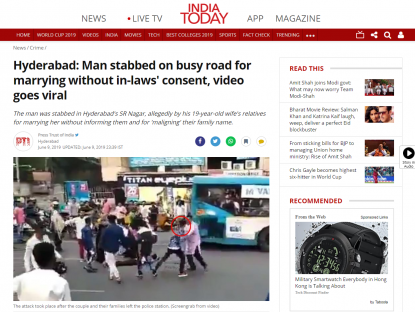 Embedded in the India Today report is this tweet that contains a 45-second video. The first 30 seconds of the footage matches the video in the misleading Facebook posts.

The caption alongside the video in the tweet translates to English as: “Hyderabad. This a video a deadly attack in a movie style on a youth named Imtiyaz in broad daylight in SR Nagar.”

SR Nagar is a residential area in Hyderabad city. AFP located the attack site here with the help of geolocation mapping tool Mappillary.

Below is a screenshot of the image of the attack site in SR Nagar found on Mapillary: 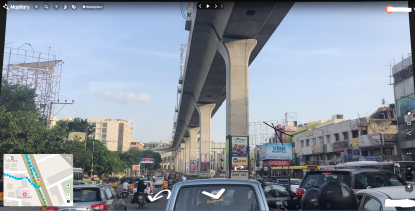 Snapshot of an image of the attack site found on Mappillary

Below are comparison screenshots of the photo of the accident site found on Mapillary (1st row) and keyframes taken from the video posted in misleading post (2nd and 3rd row): 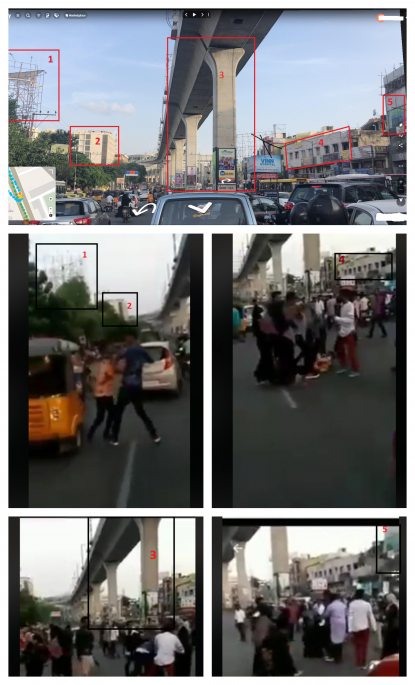