A Facebook post claims that a UN agency has named Philippine leader Rodrigo Duterte the world’s best president. Duterte’s spokesman told AFP the president has not received such an award. UN press releases and official documents online make no mention of any award for Duterte.

The widely-shared post congratulates Duterte for the honour, which it says was bestowed by the UN Economic and Social Council. 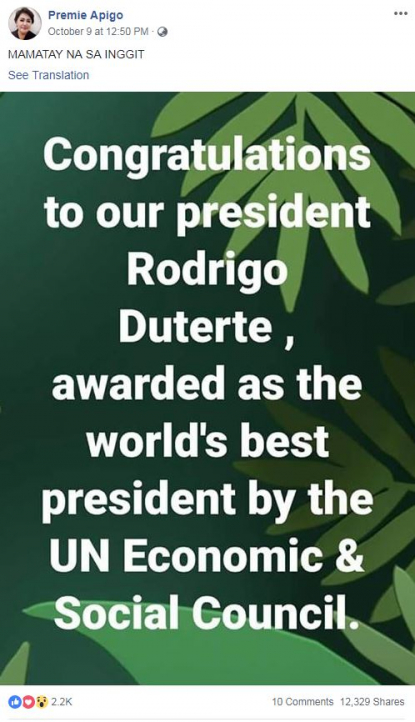 Duterte’s spokesman, Salvador Panelo, told AFP the president has received no such an award.

“There’s no official notification from the UN about the said award,” he said.

A search of the United Nations Economic and Social Council’s website shows it made no announcements on Duterte.

A search of the United Nations’ website, on the other hand, shows that the statements and press releases issued on Duterte involved a call for an investigation into the alleged extrajudicial killings in the country, but not bestowing an award on him.

A very similar post has already circulated on social media on August 27. Here is AFP’s fact check on it.

No, this photo does not show Indonesian president Joko Widodo sleeping in a refugee camp on quake-hit Lombok Island

Did a Muslim refugee vandalize a statue of the Virgin Mary in Italy? False