No, a traumatised Dutch teen was not euthanised

Reports in several international media this week that a Dutch teenager was euthanised after being traumatised by a childhood rape went viral and even appeared to spark a reaction from Pope Francis. But the reports were false; 17-year-old Noa Pothoven died at home after refusing food and drink, according to her parents.

Noa died on Sunday, June 2 and news of her death first appeared that same evening in De Gelderlander, a Dutch-language local newspaper for the Gelderland region around the city of Arnhem, where she lived. 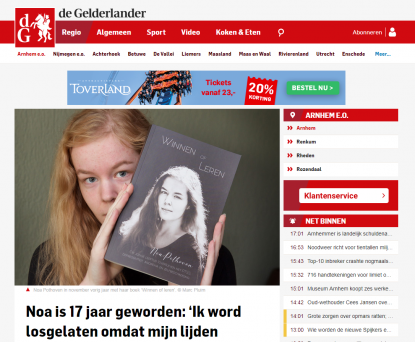 Screenshot taken on June 6, 2019 of the website of newspaper De Gelderlander

The newspaper had interviewed her last year after the publication of her book "Winning or Learning", in which she told how she had been sexually assaulted at 11 and then raped by two men at the age of 14, leading to a battle against mental illness and numerous suicide attempts.

She told the Gelderlander last December that, without her parents knowing, she had contacted the Levenseindekliniek, a clinic in the Hague that specialises in euthanasia, to ask about possible euthanasia or assisted suicide, but she had been turned down. The paper said on Sunday that she had then recently announced in a now-private Instagram post that "for a while now I've stopped eating and drinking and after many discussions... it is decided that I will be let go because my life is unbearable. After years I've lost the will to fight."

The Netherlands is one of the few countries where euthanasia and assisted suicide is legal for all citizens older than 12, but with a strict set of conditions including that the patient's physical or mental suffering is unbearable, that the patient must be conscious and making a voluntary request, that it must be approved by two doctors, one of whom must be independent, and that euthanasia can only be carried out by a doctor. Consent of parents or guardians is mandatory until a person reaches the age of 16, and parents must be involved in the decision-making process for 16 and 17-year-olds, according to Dutch law.

Then on Tuesday, a series of stories began to appear in international media incorrectly saying that Noa had been euthanised. The online editions of Britain's Daily Mail, Independent and Evening Standard newspapers, US newspapers the Washington Post and the New York Post, NBC's Euronews, the Daily Beast and Australia's news.com.au websites were all among those to carry the incorrect story. Soon it was going viral in countries including Italy, Poland, India and the United States. Pope Francis even tweeted about how "Euthanasia and assisted suicide are a defeat for all" in what appeared to be a reference to the story.

It soon emerged they were all wrong. Naomi O'Leary, a reporter with Politico Europe who has formerly worked for AFP and the Reuters news agency, pointed out the error in a tweet on Wednesday which was retweeted more than 18,000 times.  "It took me about 10 mins to check with the reporter who wrote the original Dutch story. Noa Pothoven asked for euthanasia and was refused," O'Leary wrote.

Several hours later a series of statements emerged denying that Noa had been euthanised.

First, the Levenseindekliniek said on its website that she "did not die of euthanasia," but had stopped eating and drinking "to stop her suffering."

Then lawmaker Lisa Westerveld from the GroenLinks (Green-left) party, who had been in touch with the family, tweeted a similar denial.

Next was Dutch Health, Welfare and Sport Minister Hugo de Jonge said on Wednesday in a statement emailed to AFP: "We are all deeply moved by the death of Noa at 17 years of age, and our hearts go out to her family and friends. We are in touch with her family, who have told us that, despite international media reports to the contrary, there is no question of euthanasia in this case. The family must now be allowed to grieve for Noa in peace. Questions about her death and the care she has received are understandable, but can only be answered once the facts have been established. I have asked the Health and Youth Care Inspectorate (IGJ) to look into this."

Finally Noa's parents issued a statement which was carried by the Gelderlander late on Wednesday:

"We, parents of Noa Pothoven, are deeply saddened by the death of our daughter. Noa had chosen not to eat and drink anymore. We would like to emphasize that this was the cause of her death. She died in our presence last Sunday. We kindly ask everyone to respect our privacy so we as a family can mourn."

Many other media that had carried the erroneous story later issued 'clarifications', such as here, here, here and here.