No, these photos show storm clouds in the US and a typhoon that hit Japan in 2018

Five images have been shared tens of thousands of times in multiple posts on Facebook and Twitter alongside a claim that they show Typhoon Hagibis hitting Japan in October 2019. The claim is false; one of the photos shows storm clouds in the US state of Delaware, and the others show Typhoon Trami, which hit Japan in September 2018.

One photo was published in a Facebook post here on October 11, 2019, one day before Typhoon Hagibis made landfall in Japan.

The misleading post has been shared more than 3,200 times. It shows storm clouds over a beachside boulevard.

Its caption states: “In Okinawa Japan the typhoon Hagibis captured by the locals. Stay safe everyone”.

Okinawa is Japan’s southernmost prefecture and “a region very susceptible to typhoons”, according to the Okinawa Convention & Visitors Bureau.

Below is a screenshot of the first misleading post: 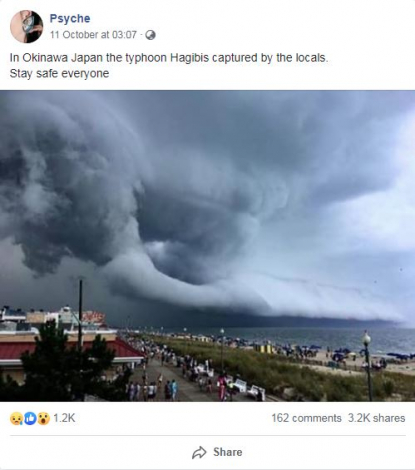 The photo has also been shared tens of thousands of times here on Facebook and here on Twitter on October 12 with a similar claim.

The claim is false. A reverse image search on Google found the same photo was published in this Washington Post report on August 26, 2019.

The photo, captioned “An extremely ominous shelf cloud approaches Rehoboth Beach, Del., on Aug. 19,” was credited to Don Burdick, who was interviewed by the Post.

Below is a screenshot of the photo published by the Washington Post: 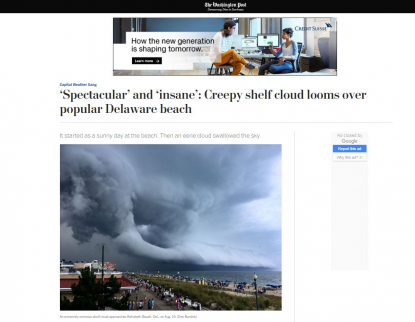 The report states in part: “Most people flock to Rehoboth Beach, Del., in the summertime for a merry atmosphere and tranquil skies. Don Burdick’s photo from Rehoboth Beach looks like something from another planet.

“The picture, snapped last Monday, is eerie. It shows an unusually well-pronounced ‘shelf cloud’ portending an imminent storm -- one that brought 75 mph winds just offshore. Half-dollar-size hail was reported just north of Indian River Bay. You can see the hail core on the left in Burdick’s photo."

The image was taken here on Rehoboth Avenue, Delaware. The location on Google Street View is embedded below.

The US National Weather Service warned of storms in the northeastern part of the country, including parts of Delaware, on August 19, 2019.

Severe weather is expected this afternoon/evening across the NE corridor with storms bringing a strong wind threat to the region. Later, into the overnight, across portions of IA, an enhanced threat is forecast to develop with an area of storms bringing a wind and hail threat. pic.twitter.com/jpkaDucC5l

An analysis using Wolfram Alpha, an online tool which archives weather data, shows it was partly cloudy with scattered showers in Rehoboth Beach, Delaware, on August 19, 2019.

Below is a screenshot of the findings on Wolfram Alpha: 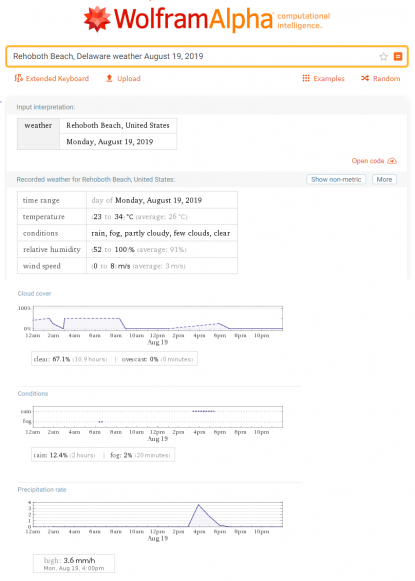 The second misleading post was published on Facebook here on October 10, 2019. It has been shared more than 1,000 times. It comprises four images that appear to show views of a storm from space.

Its caption, with the parts in Tagalog translated to English, states: “TYPHOON HAGIBIS | Satellite Image of the strongest typhoon that will hit Japan anytime from now. Let us all pray for the safety of the overseas Filipino workers and for the entire Japan”.

Below is a screenshot of the misleading post with the photos numbered by AFP: 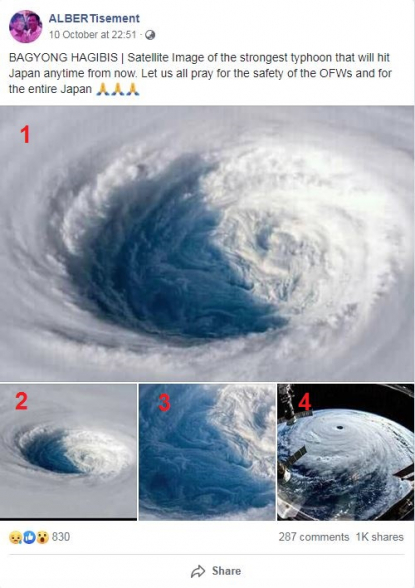 The photos have been shared in a misleading context; they were captured from space during Typhoon Trami in 2018.

As if somebody pulled the planet's gigantic plug. Staring down the eye of yet another fierce storm. Category 5 Super Typhoon Trami is unstoppable and heading for Japan and Taiwan. Be safe down there! #TyphoonTrami pic.twitter.com/4VmY2hhj2c

Below is a screenshot comparison of the misleading post (L) and Gerst’s tweet (R) with corresponding photos numbered by AFP: 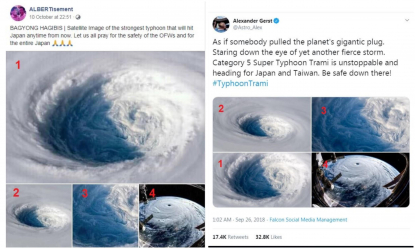 Gerst’s tweet states: “As if somebody pulled the planet's gigantic plug. Staring down the eye of yet another fierce storm. Category 5 Super Typhoon Trami is unstoppable and heading for Japan and Taiwan. Be safe down there! #TyphoonTrami”.

Typhoon Trami injured dozens of people and disrupted travel in Japan after making landfall in Japan on September 30, AFP reported here on October 1, 2018.

Photos in both of the misleading posts have also been shared tens of thousands of times here and here on Twitter alongside a similar claim that they show Typhoon Hagibis.