No, these photos do not show violence at a Muslim festival in Indian-administered Kashmir

Multiple Facebook posts published in June 2019 share three photos alongside references to violence that broke out during a recent Muslim festival in Indian-administered Kashmir. The images are being used in a misleading context; all three are old photos from unrelated protests in 2016.

The photos have been shared repeatedly on Facebook, for example in this post published on June 5, 2019, and shared dozens of times since.

The three images show a man in a camouflage vest with a bloody face; people standing in a street throwing rocks, and a damaged vehicle surrounded by soldiers.

Translated to English, the post's Hindi-language caption says: “Stone pelting continues in Srinagar after Eid prayers, should they be shot at first sight?”

Srinagar is a city in Indian-administered Kashmir; here it is on Google Maps. Eid-al-Fitr is a Muslim festival marking the end of the holy month of Ramadan, described here in Encyclopedia Britannica. 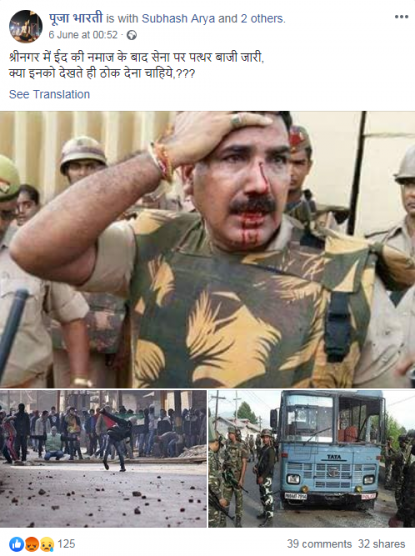 The same photos have been shared elsewhere on Facebook with exactly the same or similar claims, for example here and here.

This Facebook post, dated June 5, 2019, contains the same claim but only shares a single photo – the one showing the man bleeding from his face.

On June 5, 2019, clashes did take place in Indian-administered Kashmir during Eid-al-Fitr celebrations, with some people throwing stones, as reported by Indian news agency ANI here and Indian regional newspaper the Deccan Herald here.

The photos in the misleading Facebook posts do not show this incident; in fact they were all taken in 2016 at unrelated protests.

The first photo, of the man with the bloody face, appears in this report dated August 25, 2016 on Hindi news website Amarujala, about a clash between workers for India’s ruling Bharatiya Janata Party (BJP) and local police in the northern Indian city of Lucknow.

Below is a screenshot of the Amarujala report, in which the same image of the bleeding man appears on the right: 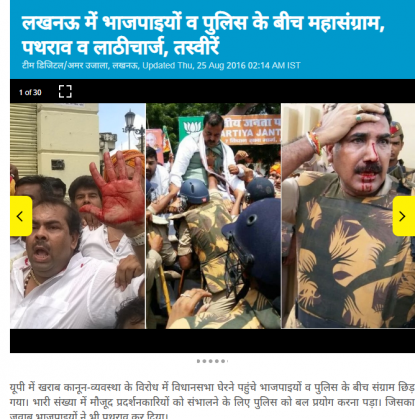 The report’s headline translates to English as: “Clash between police and BJP workers in Lucknow.”

Lucknow is nearly 1,000 kilometres (620 miles) away from Srinagar, according to this online map.

The bottom-left image, showing people throwing stones, matches this Reuters photograph taken on January 15, 2016, in Srinagar during a protest after Friday prayers there.

Below is a screenshot of the photo as it appears on the Reuters image website:

Its caption reads: “A Kashmiri protester throws a stone towards Indian police during a protest in Srinagar, January 15, 2016. The protesters demonstrated after Friday prayers demanding what they said was freedom from Indian rule in Kashmir.”

The image in the bottom-right of the misleading Facebook post was published in this article dated June 26, 2016 on the website of newspaper the Indian Express about an attack on a vehicle belonging to paramilitary soldiers in Indian-administered Kashmir.

Below is a screenshot of the news report: 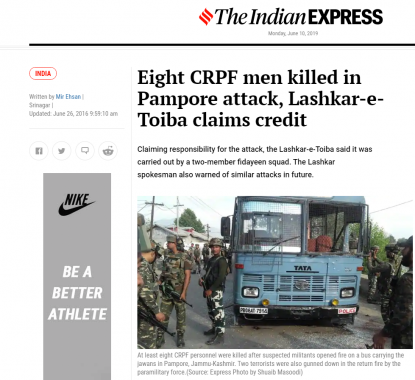 In 2016, Eid-al-Fitr was celebrated on July 6 in Indian administered Kashmir; here is a report on the festival in The Hindu.

No, this post does not contain accurate figures for registered voters in the Philippine midterm elections