No, these photos do not show a recent weapons handover by Muslim groups in Sri Lanka

A set of photos has been shared thousands of times a month after Sri Lanka's deadly Easter Sunday bombings in Facebook and Twitter posts that say they show Muslim militants handing over a haul of weapons to the military. The photos are being used in a misleading context; they do show Muslim groups surrendering weapons, but the event took place in 2009, not after the 2019 attacks.

Multiple Facebook posts contain the set of four photos, for example this one published on May 25, 2019, which has been shared more than 4,300 times since.

The pictures show large guns, grenades and bullets lined up on a table.

Also visible in the images are men sitting on the floor, some wearing white skullcaps, and other men in military uniform. In one of the photos, a bearded man in a skullcap can be seen giving a gun to a uniformed officer.

That post’s Sinhala-language caption translates to English as:

"The event at which Kattankudy Muslim people handed over a haul of T56 weapons, hand grenades, live ammunition and many other weapon varieties, which they had kept to cut jackfruit"

T56 is a type of assault rifle. Kattankudy is a town in eastern Sri Lanka with a large Muslim population. It is the hometown of Zahran Hashim, the mastermind of the 2019 Easter attacks that killed more than 250 people. Here is an AFP article about Hashim and his accomplices. 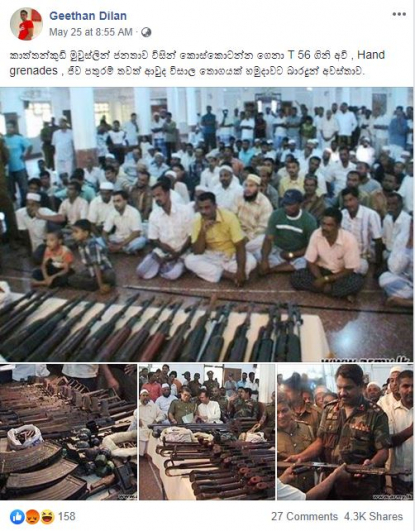 The same four images were shared elsewhere on Facebook with the same or similar claims, for example here, and on Twitter here.

Many of the misleading posts use similar phrases about the purpose of the weapons -- for example, to "cut jackfruit" here or to "play cricket" in this post published to Facebook on May 25, 2019.

The phrases are a reference to May 2, 2019 comments by Sri Lanka’s Muslim Affairs Minister M H A Haleem, who told a news conference that swords found in mosques were used to "clear shrubs", as reported here by national newspaper the Daily Mirror.

Some of the Facebook posts, such as this one published May 25, 2019, contain a clear reference to Haleem’s words and call for an explanation from him about the weapons haul.

That post's caption, translated to English, translates as:

"Cache of weapons were handed over in the presence of the dog, the Eastern Governor. Now we call upon Muslim Affairs Minister A C S Haleem to explain the purpose of these weapons. He will say it was to prevent wild boar attacks on mosques; the weapons were used to shoot them away…! Muslim organisations will hold pressers and say it was tradition for every household to have a T56 gun and that it was to protect their girl children"

All the claims are misleading; the photos do not show a recent handover of weapons.

The images were actually taken in Kattankudy a decade ago at an event held on July 4, 2009, where Muslim militant groups surrendered a cache of weapons in response to an appeal made by the government.

A reverse image search on Yandex led to this article published on the official Sri Lanka Army website, which contains the same images as in the misleading posts.

Below is a screenshot of the article, headlined “Islamic Fractions Hand Over their Weapons”: 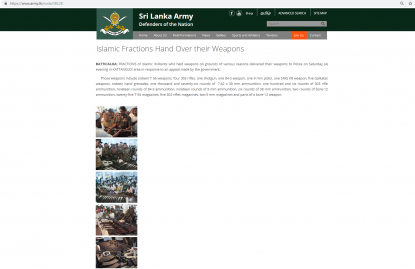 The Sri Lankan army page does not give an upload date for the images or the article, but a Google keyword search using the terms in the headline found news reports from 2009 about the event.

The screenshot comparison below shows that the men who appear in the photo in the 2009 report (top) are the same as in one of the images in the misleading Facebook post (bottom), with the same distinctive facial features and clothing: 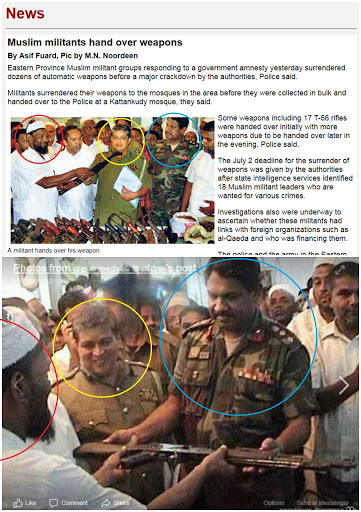 Another article about the 2009 weapons handover was published here on the Tamil Net news website.

It says, in part: “Eastern Muslim armed groups Saturday afternoon initially handed over dozens of automatic weapons including sixteen T 56 rifles to the police in response to the amnesty period that ended on July 4 afternoon 3:00 p.m.

"The event took place in Kaaththaankudi Jumma Meera Mosque in the presence of the Eastern Deputy Inspector General of Police Edison Gunatilake and Provincial Minister M. L. A. M.Hisbullah.”

Again, there are distinctive elements in the report's photo which match those in the misleading posts, such as the same uniformed men, rows of guns on a white table and bags of ammunition.

Below is a screenshot comparison of the photo in the Tamil Net report (top) and another of the images in the misleading Facebook post (bottom), with the corresponding elements highlighted: 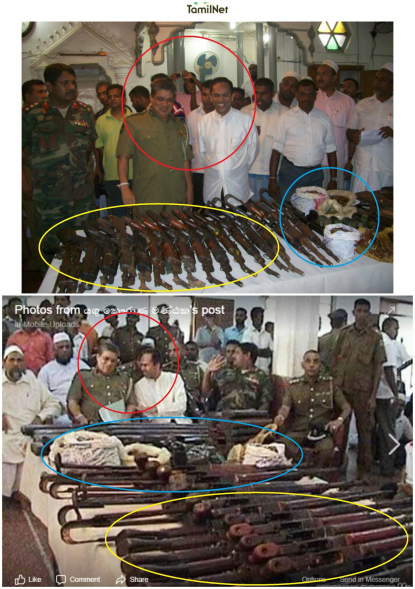 "Those photos were posted many years ago in the Army website, when a general amnesty was declared by the then government, soon after the Eastern Province was cleared of LTTE terrorism."

Sri Lanka’s war against the Liberation Tigers of Tamil Eelam or LTTE ended in May, 2009.

Brigadier Atapattu added that while he was unable to specify the exact date the images were taken, he could confirm it was prior to 2010.