No, these photos do not show one of the suicide bombers in Sri Lanka’s Easter Sunday 2019 attacks

Multiple posts on Facebook and Twitter have shared photos that they claim show one of the suicide bombers responsible for the Easter Sunday attacks in Sri Lanka in April 2019. The claim is false; the man circled in the photos is actually a Malaysian Muslim preacher who was arrested in Malaysia a week after the Sri Lanka attacks over an unrelated case. 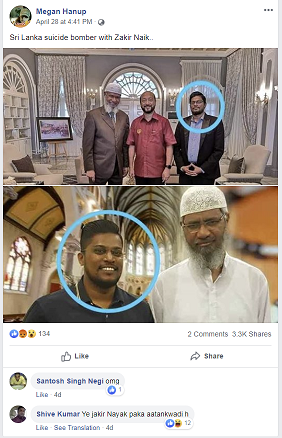 “Zakir Naik” refers to an Indian Islamic preacher. This is his official YouTube channel.

The photos in the misleading posts were also shared on Facebook here, here and here, and on Twitter here with a similar claim.

But the claim is false; the man circled in the photos is not one of the Sri Lanka suicide bombers.

A reverse image search on Yandex and keyword searches enabled AFP to establish the man circled in the photos is actually Malaysian Muslim preacher Zamri Vinoth.

Vinoth’s arrest was also reported by the Malay Mail here on April 28, 2019.

Vinoth has also posted photos of himself with Naik on his Instagram page, including here.

Sri Lanka’s acting police chief Chandana Wickramaratne has said that all suspects in the Sri Lanka blasts are dead or have been arrested by Sri Lankan police, according to media reports.

Here is an audio recording of the statement he gave in Sinhalese which was released to the media on Monday, May 6.

From the beginning of the interview to the one minute 7 seconds mark, his comments translate to English as: "After the unfortunate incident on April 21, within a short period, the Sri Lanka police was able to identify all those responsible for the attacks and make arrests.

"Most of them committed suicide. In addition, there were two bomb experts. Both of them have been killed. Those who participated in this attack, had stashed a certain amount of explosives for future attacks. All those explosives have been captured by the police.

"Therefore, police can now clearly inform you that all those who participated in this attack have been identified. All those directly involved have either been killed or arrested. Similarly, all explosives have been captured."