No, these photos actually show locust swarms in Yemen, Kenya and the Canary Islands

Four photos have been shared in multiple Facebook posts which claim they show swarms of grasshoppers invading China. This claim is false; all four photos have circulated in recent and old reports about locust swarms in Yemen, Kenya and the Canary Islands. 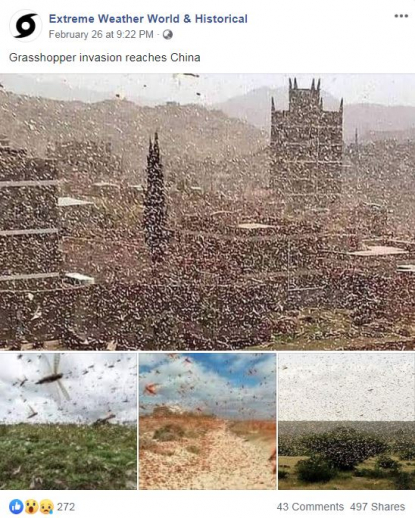 According to this March 1, 2020 report by the state-run Xinhua news agency, Chinese authorities have been monitoring locusts swarms, which can pose a serious threat to agriculture, in nearby countries. The risk, Xinhua added, remains “relatively small” but locust swarms could plague China's southwest if the pests are not effectively controlled.

The same photos of locusts swarming were also shared on Facebook here and here, alongside similar claims.

However, this claim is false and the photos are being used in a misleading context.

Reverse Google image and keyword searches found that the photos have circulated in unrelated reports about locust plagues in Africa and the Arabian Peninsula.

The first photo was traced to this July 25, 2019 report by the Food and Agriculture Organization (FAO) of the United Nations.

Its caption states: “A mature swarm flying over a village near Abyan, Yemen, looking for suitable areas to lay eggs that will hatch after about two weeks.”

Below is a screenshot comparison showing the first photo in the misleading post (L) and the FAO photo (R):

The second photo appears on this page on the website of the Associated Press (AP).

Its caption states in part: “Swarms of desert locusts fly up into the air from crops in Katitika village, Kitui county, Kenya Friday, Jan. 24, 2020.”

Below is a screenshot comparison showing the second photo in the misleading post (L) and the AP photo (R):

The third photo was taken back in 2004 by the European Pressphoto Agency (EPA), and can be viewed on the news agency’s website here.

A portion of its caption reads: “Thousands of African locusts fly around at a Fuerteventura beach, Canary Islands, on Monday, 29 November 2004.”

Below is a screenshot comparison showing the third photo in the misleading post (L) and the EPA photo (R):

Finally, the fourth photo is from this Reuters page, and is captioned: “A swarm of desert locusts fly over a grazing land in Nakwamuru village, Samburu County, Kenya January 16, 2020.”

Below is a screenshot comparison showing the fourth photo in the misleading post (L) and the Reuters photo (R):