No, these are not photos of Pakistan on February 27, 2019 after Indian airstrikes

Photos that have been shared hundreds of times on Facebook claim to show a devastated area of Pakistan on February 27, 2019 after Indian airstrikes. The claim is false; the images are AFP photos showing the aftermath of a 2005 earthquake which killed tens of thousands of people in Pakistan.

The post’s caption says in Hindi: “You have seen a lot of photos from Pulwama, now see the state of Pakistan today.”

It contains three images which show destroyed buildings and dead bodies in the rubble. 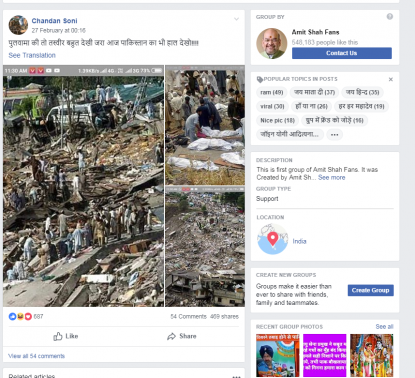 Screenshot of the misleading images

The misleading claim has also been posted on Twitter here.

"Pulwama" refers to a suicide attack in the Pulwama district of Indian-administered Kashmir which killed 41 Indian paramilitary troops on February 14.

Here is an AFP report on the attack.

Indian media reports published multiple photos of the Pulwama attack at the time, for example here, here, and here.

On February 26, 2019, India said it had carried out airstrikes on suspected militant bases inside Pakistan. Here is an AFP report on the strikes.

The images in the misleading posts do not show Pakistan on February 27, 2019 -- they are all AFP photographs from 2005.

The three photos actually show the aftermath of an earthquake which struck near the town of Muzaffarabad in Pakistani Kashmir on October 8, 2005, killing tens of thousands of people.

Here is a BBC report on the 2005 Kashmir earthquake.

The main image used in the misleading post is an AFP photo taken in Balakot, Pakistan, on October 10, 2005. It can be seen here on AFP’s Image Forum website.

The photo caption says: “Pakistani residents walk through the debris in Balakot town in the North Western Frontier Province, 10 October 2005. Between 30,000 and 40,000 people died in a massive earthquake that hit Pakistan at the weekend, the United Nations Children's Fund (UNICEF) and a senior government official said.”

Below is a screenshot of the photo on AFP Image Forum: 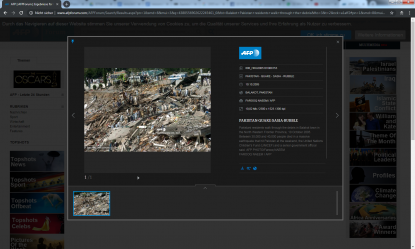 The second image is an AFP photo which was also taken in Balakot, Pakistan on October 11, 2005. The image can be seen here on AFP Image Forum.

Below is a screenshot of the photo on AFP Image Forum: 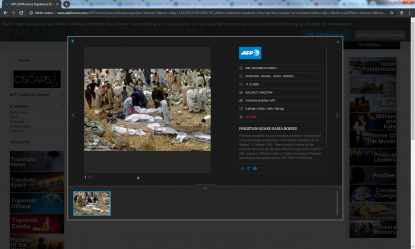 The third image is an AFP photo which was also taken in Balakot, Pakistan on October 15, 2005. Here is a link to that photo on AFP Forum.

Below is a screenshot of the photo from AFP Forum: 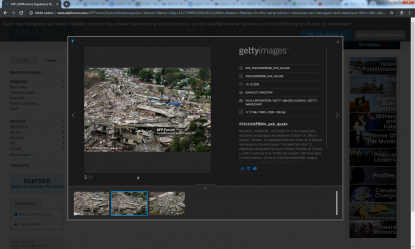