No, Rwanda hasn’t dropped French as an official language

Bogus claims have been circulating in parts of Africa that Rwanda has just adopted Swahili as its official language, dropping French entirely. Swahili did indeed become Rwanda’s fourth official language, after Kinyarwanda, French and English -- but this change dates back more than two years. French remains an official language.

One article reporting the false rumour, on the blog Enlightenment Africa, has been shared nearly 7,000 times from various accounts -- we’ve archived it here. English is also being “sidelined” as a language in Rwanda, the blog claimed. 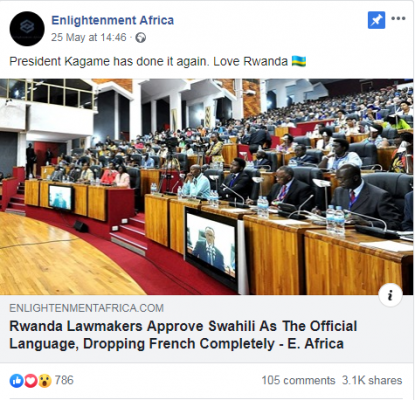 A screenshot taken on May 29, 2019 shows the misleading article posted on Facebook

“This is good, really good but such a move leaves the Belgian (the former colonizer) and French authorities furious,” it quotes “people” as saying.

A similar article on the Watchdog Uganda news website was shared more than 2,000 times, while another was posted on this Nigerian blog.

The unfounded rumour has also spread in French, including on this Congolese Facebook page. “The Rwandan parliament has just approved Swahili as Rwanda’s official language. Now French and English are secondary languages,” reads the caption. 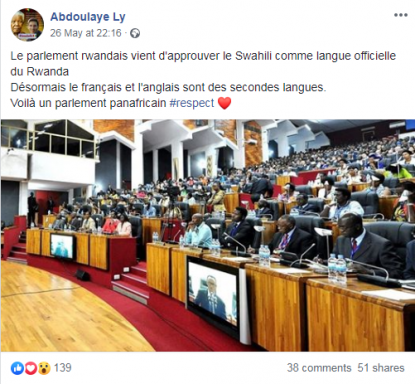 The same rumour shared in French, this time from a Congolese account

In fact, Rwanda’s National Assembly voted for Swahili to become one of the country’s official languages back in February 2017 -- not in May 2019, as suggested by recent misleading online posts.

As reported by AFP at the time, Swahili joined national language Kinyarwanda along with French and English as languages used for official communications.

The recognition of Kiswahili was one of a number of commitments Rwanda made in 2007 in the East African Community, an organisation whose three founders -- Kenya, Uganda and Tanzania -- use Swahili as an official language alongside English.

Before the 1994 genocide, Swahili was spoken only in some urban areas of Rwanda, and only Kinyarwanda and French had official status.

After the genocide, with the return of former refugees and exiles -- many of whom had been hosted in anglophone and Swahili-speaking countries of East Africa -- English became the third official language, while Swahili gained momentum.

Swahili belongs to the Bantu group of languages ​​and is the result of interactions between the peoples of East Africa and people from India and the Gulf. It is the most widely spoken language in sub-Saharan Africa and since 2004 it has been one of the official languages ​​of the African Union (AU).

The role of French in Rwanda

Contrary to the rumour, French remains an official language in Rwanda. As reported by AFP, Rwanda’s then foreign minister, Louise Mushikiwabo, was named head of International Organisation of La Francophonie (OIF), the global group of French-speaking nations, last October.

French, the language of former colonial power Belgium, has been declining in use in Rwanda since the genocide.

English, which was spoken by most of the Tutsi refugees who returned from Uganda to form the new political and administrative elite, replaced French in 2008 as the obligatory language used to teach children in Rwandan public schools.

President Paul Kagame, who is himself Ugandan-educated, introduced English in 2003 as the third official language listed in the constitution, alongside Kinyarwanda and French.

Nonetheless, Rwanda has not dropped French as an official language, even if it is used much less than English these days.

According to the OIF, Rwanda counted some 700,000 French-speakers in 2015 -- about six percent of the population.