No, the Reserve Bank of India did not tell people to press ‘Cancel’ twice at ATMs

An image circulating on Facebook, WhatsApp and Twitter claims that the Reserve Bank of India has told people to “press the ‘cancel’ button twice” before using an ATM in order to prevent fraud. The claim is false, the RBI has issued no such warning, and security experts said the measure was unnecessary.

The image has been shared repeatedly on Facebook, for example here and here, on Twitter for example here, and has gone “viral” in WhatsApp groups in India, according to local media reports. 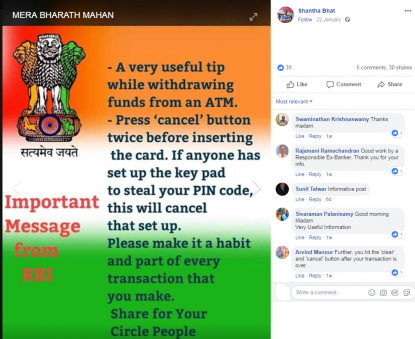 The image has the national emblem of India in the top left hand corner and a green, white and orange background -- the colours of the Indian flag -- with the purported warning message written across it.

“Important message from RBI,” is written down the left hand side.

“A very useful tip while withdrawing funds from an ATM. Press ‘cancel’ button twice before inserting the card. If anyone has set up the key pad to steal your PIN code, this will cancel that set up. Please make it a habit and part of every transaction that you make. Share for your circle people.”

Reserve Bank of India spokesperson Jose Kattoor denied the bank had issued any such warning.

“This news is false,” he told AFP.

A search of the RBI’s official website and press releases found that there was no mention of any such notification.

Manipal Technologies Limited, India’s largest bank card manufacturer, told AFP that it was not necessary to press ‘cancel’ twice to protect from fraud.

"The Facebook reports are fake and there is no authenticity to the entire message. Cancelling once is good enough to nullify the transaction,” Ashwin Shenoy, Assistant Vice President, Manipal Technologies Limited told AFP.