No, President Buhari did not appoint a Supreme Court judge who was never called to the bar

In a video shared on January 28, 2019 a man protesting Muhammad’s appointment claimed that the new Chief Justice was "not even a lawyer" and "had not been called to bar." 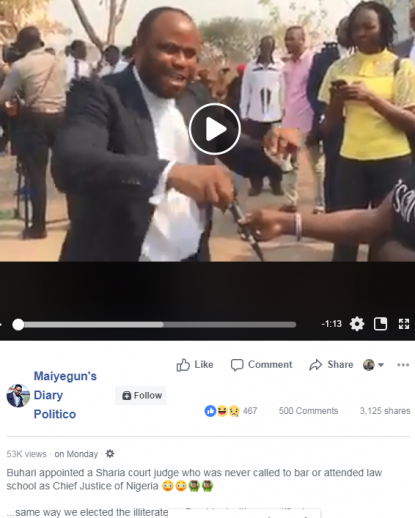 A screenshot taken on January 31, 2019 of a Facebook video claiming that the new acting Chief Justice had not attended law school and was not called to bar

The video received more than 52,000 views and more than 3,100 shares on the Facebook page "Maiyegun's Diary Politico" and was captioned: "Buhari appointed a Sharia court judge who was never called to bar or attended law school as Chief Justice of Nigeria."

Several posts and videos have repeated the claims. 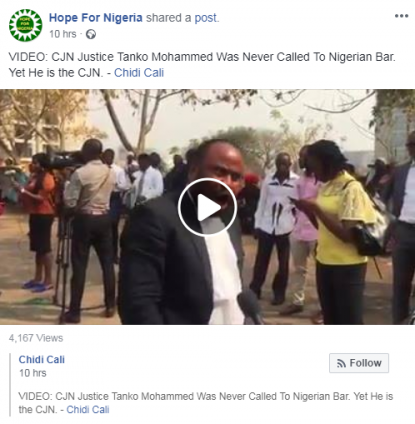 A screenshot taken on January 31, 2019 of a Facebook video claiming that the new acting Chief Justice had not attended law school and was not called to bar

Critics and opposition groups in Nigeria described the move as “dictatorial”, and online critics were quick to denigrate acting Chief Justice Muhammad.

A person must be called to the bar before they can be a legal practitioner in Nigeria, according the the constitution, line 231.

“A lawyer cannot become a magistrate if he or she wasn't called to bar," a former chairman of the Nigerian Bar Association in Lagos, Monday Ubani, told CrossCheck Nigeria, a network of media organisations including AFP, fact-checking misinformation.

Muhammad previously served as a Kadi (Judge) of the Sharia Court of Appeal in Bauchi State, northern Nigeria from 1991-1993.

According to the Nigerian Constitution (276), a person is not qualified to hold that position unless he is a legal practitioner in Nigeria, and has been called to the bar.

Muhammad began his judicial career as a magistrate in 1982 with the Bauchi State Judiciary, according to his profile on the Supreme Court website.

Muhammad’s profile on the websites of the Supreme Court and the National Judicial Council states that he attended Nigerian Law School.

This fact-check was completed in collaboration with CrossCheck Nigeria.