No, this picture does not show a girl being sold into sexual slavery as a child bride

A picture that claims to show a young girl being sold into sexual slavery as a child bride has recently been shared by thousands of Facebook users. The picture is actually a screengrab from a video of a Koran recitation contest organized by the Islamic State organization that has been circulating since at least 2013.

“To all you misguided, uninformed liberal ‘women’ demonstrating in favor of embracing Islam, this young lady is being sold into sexual slavery as a child bride. She is a Christian. She watched her father beheaded and her mother raped. Where is her safe place?,” says the text written on the picture shared 17,000 times on Facebook. 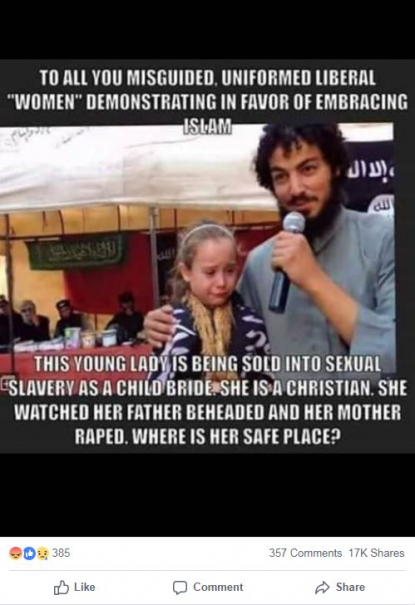 The video from which the screengrab has been taken is also available on Facebook and an Arabic-speaking AFP journalist reviewed the footage and confirmed that the girl is reciting chapter 112 of the Koran in a competition.

“She made some errors so the man helps her, and he says, ‘Ma sha Allah (Bravo), can you give me two other chapters?’. She recites the chapter 113 and the man asks the crowd, ‘Who is the winner?’ Apparently the girl wasn’t happy after the crowd's answer, so she started to cry,” the AFP journalist said.

Here is a screengrab from earlier in the video, before the girl made the mistake.

Here is a screengrab from later in the video, after she made the mistake. 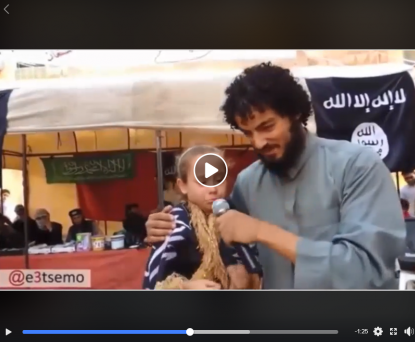 Similar videos featuring the same man can be found on YouTube and were presumably shot in Aleppo, Syria in 2013.

Although this specific image does not portray a young girl being sold as a child bride, one in five girls aged 20-24 in the world have been married before the age of 18, according to UNICEF.

No, this video does not include an admission by the Pakistani army that 200 militants were killed in airstrikes by the Indian Air Force in Balakot

No, these Zimbabwean children were not left to find their own way to safety after Cyclone Idai