No, this photo does not show Trump has started special flights between New York and Mumbai so Indians can vote for Modi

A photo has been shared thousands of times in multiple online posts alongside a claim that US President Donald Trump has started six special flights from New York to Mumbai so Indians can travel to vote for Prime Minister Narendra Modi. The image actually shows Modi campaigners at a shopping mall in Pune, India; no announcement about any such flights has been made by Trump or the White House.

The photo, for example in this Facebook post published April 17, 2019, which has been shared more than 2,300 times since, shows a group of people standing on an escalator wearing orange and white T-shirts.

Some of their shirts have the words: "Modi Once More" on them, referring to the Indian prime minister. Here is Modi's official Twitter account.

The post’s Hindi-language caption translates as: "Friends, to support Modi, America's Trump has started six special flights from New York to Mumbai so that Indians can go to India to vote for Modi". 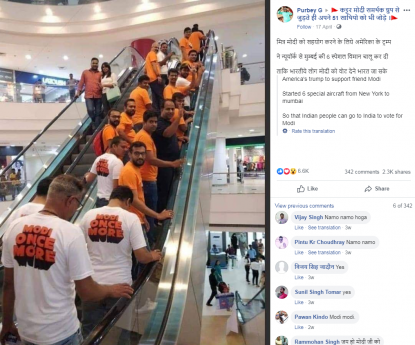 India’s general election started on April 11, 2019, and runs for six weeks. Here is a recent AFP report about the polls.

The same photo has been shared elsewhere on Facebook with an identical claim, for example here and here. It was also contained in another Facebook post which was shared more than 8,500 times, but has now been removed – here is an archived version.

The image actually shows Modi campaigners at a shopping mall in the Indian city of Pune, around 120 kilometres (75 miles) away from Mumbai.

Keyword searches on Twitter found that the photo appeared in this earlier tweet about a Modi campaign event posted on April 14, 2019, embedded below:

The caption of the tweet says: "NaMo supporters at Amanora Mall , People from mall also joined and encouraged our team !! #NamoAgain".

It does not mention Trump or any special flights from the US to India.

The photo was not in fact taken in Pune's Amanora Mall, but in a neighbouring shopping centre called Seasons Mall. The photo in the misleading posts corresponds with this image tagged to Seasons Mall on Google Maps.

Below is a screenshot comparison of the photo in the misleading Facebook posts (L) and the Google user’s image (R).

AFP has circled the structures in the photos which match; namely the large red poles and the plant next to the escalator: 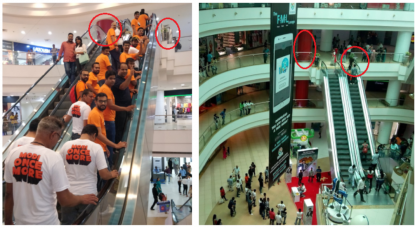 A shop named "Lazoush" can be seen in the photo in the misleading Facebook posts. Here it is on Google Maps.

The photo was also verified as showing a Modi campaign event in the state of Maharashtra in this report by Indian fact-check website Fact Crescendo.

No announcements have been made by either Trump or the White House on special flights for Indians to travel from the US to India and vote for Modi.

This search of the White House’s official website found no recent announcements which included the word "Modi". 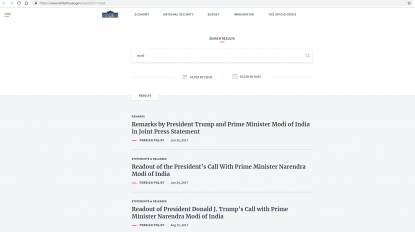 Screenshot of search results on whitehouse.gov

This search of the White House’s official Twitter account also found no recent results which included the word “Modi”.

Below is a screenshot of the search results:

This search of Trump’s official Twitter account for “Modi” also found no recent results which included the word. Below is a screenshot of the results: