No, this photo does not show an Indian political activist making a speech in front of a map showing Indian states redrawn as part of Pakistan

A Facebook post shared hundreds of times contains a photo which it claims shows Indian political activist Kanhaiya Kumar speaking at an event with a map behind him. The map shows Indian-administered Kashmir and India's western state of Gujarat redrawn as part of Pakistan. But the claim is false; the image has been doctored to include the map in the background.

This Facebook post which carried the photo was shared on February 23, 2019. It received more than 1,200 shares in a public group entitled ‘One step towards Hindu nation’, which has nearly a million members. 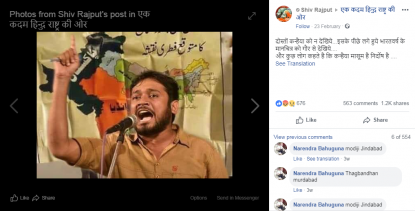 It received more than 450 shares in a public group entitled ‘Pappu’s Political Disorder’, which has more than 83,000 members.

The caption in Hindi language translates to English as: “Friends, don’t look at Kanhaiya, instead carefully look at the map of India behind him….and some people say that Kanhaiya is innocent.”

The photo shows Kumar giving a speech with a map behind him. The map contains words in Urdu language; it highlights Pakistan in dark green along with Indian-administered Kashmir and the Indian state of Gujarat in the west.

A reverse image search found the image had been doctored to include the map.

An earlier version of the photo without the map in the background can be seen in this news story published by Indian news website The Hindu.

Below is the screenshot of the Hindu news article published on March 12, 2016: 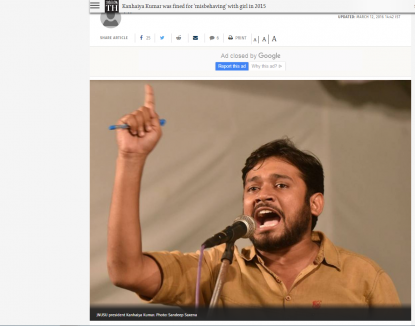 Screenshot of The Hindu news article

The caption listed Kumar as a president of Jawaharlal Nehru University Students Union (JNUSU). Here is a report published by NDTV on March 4, 2016, which states he was president of JNUSU.

The photo, which does not include a map in the background, is credited to photographer Sandeep Saxena. The report does not contain specific details about when the photo was taken.

Sandeep Saxena, a staff photographer for The Hindu, told AFP he took the image of Kumar in 2015.

“The photo of Kanhaiya Kumar is taken by me during JNU’s (Jawaharlal Nehru University) 2015 presidential debate. The event happened in September and I was there covering it.”

This video was shared on May 10, 2016 and entitled “Kanhaiya Kumar JNUSU, Firing Speech | A Must Watch Video For All”.

In the clip, there is no map behind him and he can be seen wearing identical clothing as the misleading Facebook photo.

In this second clip showing the same event, Kumar can be seen brandishing a pencil and pointing his finger in exactly the same gesture as seen in the Hindu photograph and misleading image.

Again, in the second clip, there is no map behind him and he is wearing identical clothing as the misleading Facebook photo.

Here is a screenshot from the video which corresponds with the original photograph on The Hindu’s report: 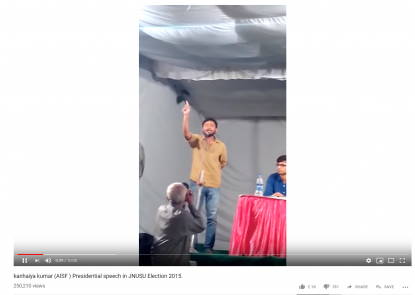