No, this photo does not show the former president of the Indian National Congress Party Sonia Gandhi sitting on former Maldives President Maumoon Abdul Gayoom's lap

A photo shared hundreds of times on Facebook purports to show the former president of the Indian National Congress Party Sonia Gandhi sitting on the lap of the former Maldives President Maumoon Abdul Gayoom. The claim is false; the photo has been doctored from an AFP photo of Gandhi’s meeting with Gayoom in New Delhi in 2005, during which they sat on separate seats.

It has since been shared more than 830 times. The Hindi language caption translates to English as: "This is the proof to all the Congress supporters of how things are made in this party."

The same photo was shared with a similar claim on Facebook here.

A reverse image search for the photo on Google reveals it has been manipulated from an AFP photo.

The original photo can be seen on AFP Image Forum here. It shows the two leaders sitting on separate chairs.

Below is a screenshot comparison of the doctored image (left) with the original AFP image (right):

The AFP caption states: “President of the Republic of Maldives Maumoon Abdul Gayoom (R) talks with chairperson of India's United Progressive Alliance (UPA) Government and Congress Party President Sonia Gandhi during a meeting in New Delhi, 29 March 2005. Gayoom is on a six-day visit to India until 01 April, during which he is scheduled to meet with Indian leaders and visit the southern cities of Madras and Trivandrum."

This AFP image from the same meeting shows Gandhi and Gayoom shaking hands. 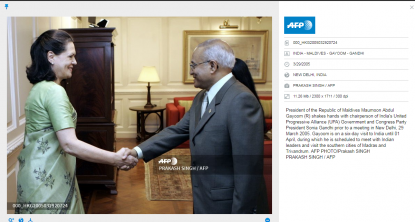 A screenshot of another AFP image of the same 2005 meeting

This official press release from the Indian government on March 23, 2005, stated that President Gayoom planned to visit India between March 27 to April 1, 2005.

​This report by Indian news site The Economic Times published on December 16, 2017, states that Gandhi was leader of the India National Congress from 1998 until December 2017, when her son Rahul took over.

This report by The Economist published on October 30, 2008, states Gayoom left office in late 2008 after 30 years in power, after being defeated in an election by Mohamed Nasheed.