No, this photo does not show Filipino boxer Manny Pacquiao endorsing Imee Marcos for senator

A photo shared hundreds of times on Facebook purports to show Filipino boxer Manny Pacquiao holding a T-shirt endorsing the senatorial candidacy of the daughter of late dictator Ferdinand Marcos. The claim is false; the photo has been doctored from a 2015 original of Pacquiao showing support for the Philippine basketball team.

Ferdinand Marcos's 20-year rule of the Philippines ended in 1986 when he was toppled in a popular uprising.

His daughter Imee Marcos is running for senator in May 2019 elections as a guest candidate of the Partido Demokratiko Pilipino-Laban (PDP-Laban), the political party of President Rodrigo Duterte. There have been multiple media reports on her candidacy, for example here and here.

This Facebook post, published on February 27, 2019, and shared more than 500 times since, contains a photo of Pacquiao holding a white T-shirt with a picture of Imee Marcos's face on it. 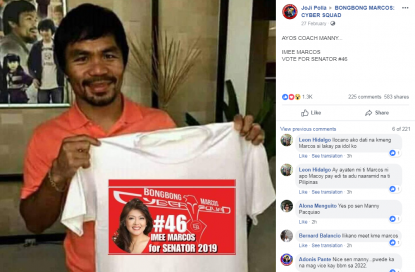 Imee Marcos's ballot number is 46, according to her official campaign materials here.  Bongbong Marcos refers to her younger brother, also an influential politician.

The Instagram picture shows the boxer holding a white T-shirt with the words printed on it in English: "#PUSO2019 TEAM PILIPINAS WORLD’S MOST VALUABLE BASKETBALL FAN"

Apart from the T-shirt designs, the images are identical.

Basketball has touched the lives of every Filipino. Hosting FIBA 2019 World Cup would be a dream come true for our nation #puso2019 #FIBA

The caption of the Instagram post says: "Basketball has touched the lives of every Filipino. Hosting FIBA 2019 World Cup would be a dream come true for our nation #puso2019 #FIBA"

The Philippines made a bid to host the 2019 International Basketball Federation (FIBA) world cup but lost to China.

Multiple comments like the one below, which says "Love you manny for endorsing imee", indicate that some people believed Pacquiao really was holding the T-shirt in the doctored image:

No, this is not a video of Indian soldiers dancing to celebrate a recent airstrike on Pakistan

No, this image doesn’t show ‘prophet’ Bushiri reading the bible upside down