No, this photo does not show a crowded beach in China

According to several posts on Facebook, a viral photo showing throngs of people on a beach was taken in China. A joke to some, but a proof of the calamity of overpopulation to others. This is actually a picture taken in Rio de Janeiro in 2013 of a crowd that attended a mass of the pope.

"A beach in china. WOW!!!" reads one post accompanying the photo. This shot, showing a densely crowded beach, has been shared more than 45,000 times in a week. 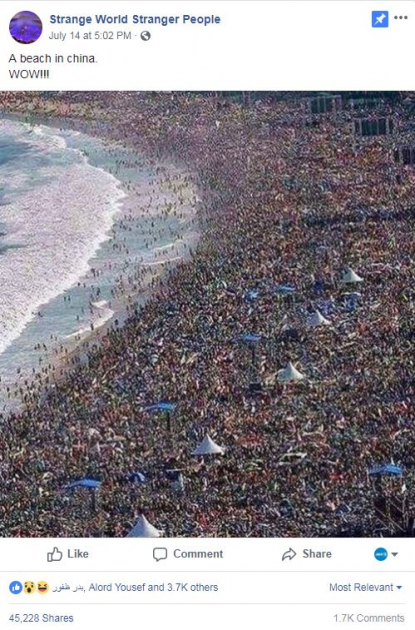 It is not a Chinese beach, but Copacabana beach in Rio de Janeiro. The photo was taken in 2013 at World Youth Day, an annual event that brings young Catholics together. The beach is recognizable, particularly by its tents with white and blue roofs, as well as the giant screens put up to transmit the mass celebrated by the pope, in this video from Le Monde.

This AFP photo from July 28, 2013 also shows a view of the World Youth Day crowd. 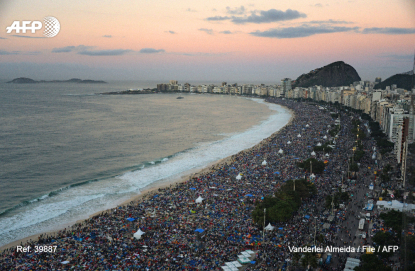 In 2013, nearly three million people went to Copacabana Beach to attend the event. According to AFP reports from the time, many pilgrims slept on the beach the night before the final mass of the pope's visit to Brazil. Few people in the picture in question are in the water or sunbathing, and this scene is not common.

Despite some comments pointing out that the photo is not of a beach in China, they did not stop Facebook users from expressing their opinion on overpopulation in China.

On an Australian Facebook page that received 1,700 shares, the most popular comment is, "They have overpopulated and ruined their own country stop that from happening in Australia."

A post of the picture on a page from the US state of Arizona that was shared more than 12,000 times includes comments like, “Disgusting I would never go, China needs to work on their overpopulation a bit more.” 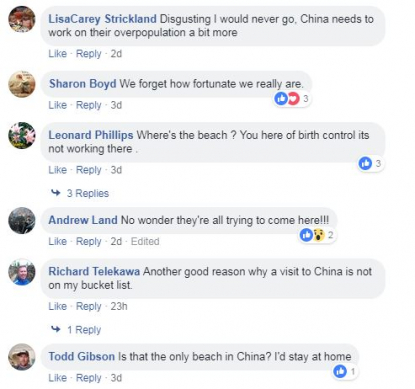 However, on a French post, people denounced the fact that the photo was wrongly attributed to China because of the stereotype that Asia is overpopulated.