No, the pension for the elderly in the Philippines has not increased 12-fold

Online reports claim the Philippine government has begun offering pensions to senior citizens of 6,000 pesos (about 110 USD) a month. Authorities have warned the public and told AFP this is false, and the pension remains at 500 pesos a month.

Dozens of reports and Facebook posts, such as this say that the new 6,000 peso pension is available to senior citizens as a gift from DU30, the nickname of President Rodrigo Duterte.

Below is a snapshot from one of the pages: 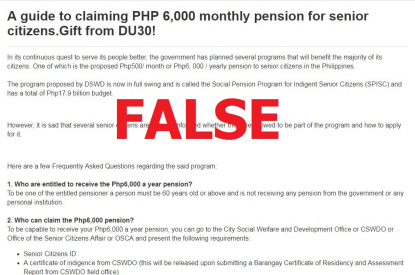 When these reports, and others with the same claim, are published on Facebook they also have the following picture and headline: 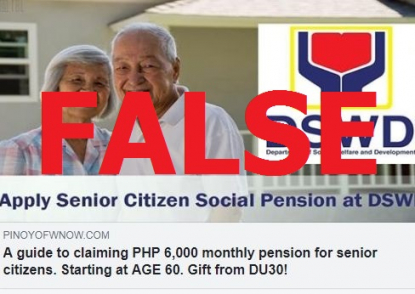 Clicking on the accompanying link leads to a video report that says the pension programme has expanded to cover more seniors. It does not say recipients will get 6,000 pesos per month.

At least 50 different sites have shared the false reports, and they have been shared tens of thousands of times on Facebook, according to Crowdtangle data.

The Philippines’ Department of Social Welfare and Development (DSWD) does offer a pension to seniors citizens, but it is also only for those who are poor or disabled and it is only worth 500 pesos a month. Details about the eligibility requirements and the coverage of the pension are here.

Since the online reports have appeared, the agency has warned the public that recipients get “P500 (pesos) monthly and not P6,000 as being circulated over social media”.

Annaliza Salud, one of the people who runs DSWD’s programme, confirmed the warning.

“No, the headline of the stories is not accurate. The social pension programme only provides P500 per month to indigent old persons,” she told AFP.

No, this photo does not show a rally of Philippine President Rodrigo Duterte’s supporters