No, Ottawa police did not shut down a nightclub for selling human meat

An article shared on Facebook claims that a nightclub in Ottawa was shut down by the police for killing patrons and selling them as meat. The article is false, Ottawa police confirmed to AFP, adding that no club with such a name even exists in the Canadian capital.

“Ottawa Police have shut down a nightclub, Venus 24 Nightclub, in the city of Ottawa after investigation uncovered that the owner killed patrons of the facility and served to others as meat,” claims the false article, shared 2,300 times, according to social media monitoring tool CrowdTangle. 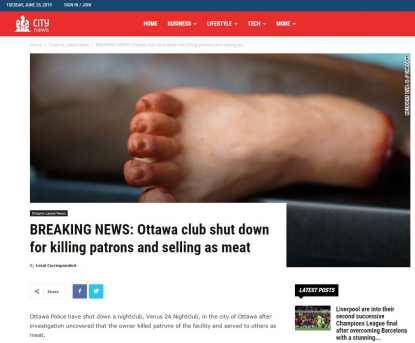 According to this story, the nightclub, which started operating in February, was closed after a police investigation revealed human parts kept in freezers. It claimed that the owner was subsequently arrested but several suspects remained on the run. According to the false article, the police extended the search to other Ottawa clubs and restaurants with suspected ties to the Venus 24 owner.

The article cites a statement from the local police in Ottawa as a source.

However, Ottawa Police Service (OPS) “has not issued any media release as stated in the article,” Amy Gagnon, an OPS spokeswoman, told AFP in an email. Moreover, “to our knowledge no club named Venus 24 nightclub exists in the City of Ottawa,” Gagnon added.

An identical article published on the same website claimed that a different club, Gagas nightclub, was shut down for the same reason in Sri Lanka.

Sri Lanka Police told AFP that it had not closed a nightclub which killed its patrons or sold the human flesh to its guests, and said no such nightclub had ever existed.

IP Mahakumara, officer for Sri Lanka Police Public Relations Office told AFP by phone on June 17, 2019: “Up to date, no raid has been done on a nightclub named Gagas and neither has a nightclub been uncovered where its patrons were killed and sold off for flesh.”

Indentical articles published on the same website claimed that different clubs were shut down for the same reason in Australia, the United Kingdom and Trinidad and Tobago.

Identical articles published on another suspicious website also claim that the sale of human meat happened in Thailand, Guyana and Belize.

All articles use the same wording, changing only the name of the cities and of the nightclubs. 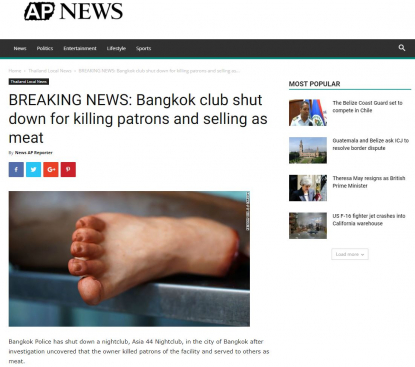