No, Ondo State in southwestern Nigeria has not reduced its debt by 50% in the past three years.

A story that has been circulating both in traditional and on social media in Nigeria claims Ondo State, under the current administration of Governor Rotimi Akeredolu, inherited debt of 220 billion naira ($717 million), which it has, since 2017, reduced by more than half. However, the claims are false; Ondo's debt has actually increased by 16.8 percent from 68.3 billion naira ($222.5 million) in the past three years.

The Commissioner of Information and Orientation in Ondo, Donald Ojogo, said Akeredolu’s administration has reduced the state’s debt by more than half from 220 billion naira ($716.6 million), since it took office in February 2017.

Ojogo, who was speaking on Channels Television in Lagos, also claimed that the government under the ruling All Progressives Congress has ramped up the state’s monthly revenue generation to a billion naira ($3.26 million) from 700 million naira ($2.28 million) under the previous government of the People's Democratic Party. 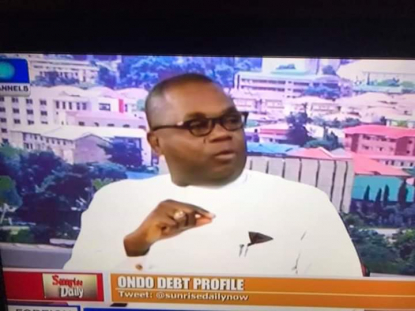 (An image showing Donald Ojogo on the local television)

The story, since reported by some major Nigerian newspapers here, here, and here, has been spreading on social media as well as in traditional media. It has also attracted scrutiny over the state’s debt status.

The state published the story here on its website, while a government-funded media organisation, Ondo State Radiovision Corporation (OSRC), comprising a local radio and television station reported a similar version of the story here, and shared here on Facebook. 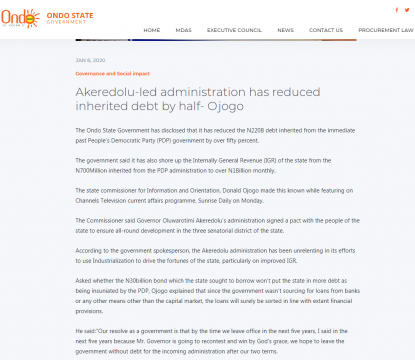 (A screenshot of the published story taken on January 9, 2020)

“The Ondo State Government has disclosed that it has reduced the N220B debt inherited from the immediate past People’s Democratic Party (PDP) government by over fifty percent,” OSRC reported.

Several posts were also shared alongside the claims on Facebook and on Twitter. We’ve achieved some of the posts here, here, and here.

The governor is left with barely a year to complete his first term of four years. But, with an election in the pipeline later this year that will determine his future, the Nigerian oil-producing state’s debt situation has become a major talking point.

What Akeredolu inherited and the situation now

Akeredolu was declared the winner in a November 2016 gubernatorial election held in Ondo.

The Nigerian debt agency is yet to release figures for December 2019. However, the latest statistics presented here and here show that Ondo’s total debt had increased to 79.77 billion naira ($259.8 million) in June 2019 -- this is 16.8 percent higher than the figure in December 2016.

What we know about Ondo's revenue generation

“The government said it has also shored up the Internally General Revenue (IGR) of the state from the 700 million naira inherited from the PDP administration to over 1 billion naira monthly,” reads an extract from the story shared on the government's website.

However, the state’s monthly revenue generation increased to an average of 3.17 billion naira ($10.3 million) between January and June 2019 after it reported more than 19 billion naira ($61.9 million) as revenue for the period.