No, this is not a video of a Pakistani fighter jet shooting down an Indian plane in Kashmir

Video posts viewed millions of times on Facebook purport to show a Pakistani fighter jet shooting down an Indian Air Force plane. The posts were uploaded hours after Pakistan said it had shot down two Indian planes in disputed Kashmir in February 2019. The claim is false; the footage has been circulating online for three years.

Earlier that day Pakistan announced its air force had shot down two Indian planes in the disputed Kashmir region. Here is an AFP report on the India-Pakistan situation.

The 30-second video appears to show a fighter pilot, wearing a Pakistan Air Force (PAF) name tag, shooting down another plane in a dogfight, with a close-up of a missile being launched from a jet's wing.

The post's caption says, in Urdu: "Scenes of shooting down of Indian plane by Pakistani eagles."

The same clip has been shared multiple times on Facebook in the past week, for example here, here and in this post – also published February 27, 2019, and viewed nearly five million times since. 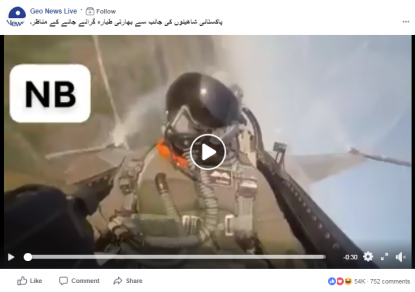 An AFP analysis using digital verification tool InVID found the footage was not taken during the recent Kashmir escalation but has been circulating online since 2015.

The misleading footage was taken from an original short documentary film made by PAF called “Air Defenders of Pakistan”.

The film, which is just under 15 minutes long, appears in full here on Facebook and here on YouTube. A shortened version was also published here on the verified YouTube account of Dunya News, a major Pakistani broadcaster, in October 2015.

The air force provided AFP with a DVD copy of the film, which is identical to the YouTube video below:

The only difference is that a white box with the letters "NB" written in black appears to have been added to the misleading video.

Below are side-by-side screenshots of the post claiming this is video of February 27, 2019 (on the left) and a YouTube upload of the official PAF video (on the right): 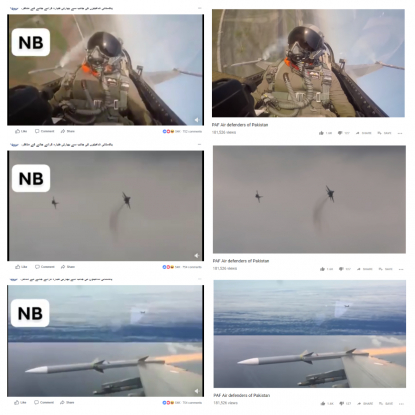