No, this is not the skeleton of biblical giant Goliath

A widely-shared Facebook post contains an image which it claims shows the skeleton of the biblical giant Goliath. A reverse image search found the photograph first appeared online in 2007. The photographer told AFP it is of the sculpture "Calamita Cosmica" created by an Italian artist.

The post carries this caption: “The Skeleton of Goliath found in Jerusalem. The Word of God is so true!! Please keep sharing this to spread the gospel”.

Here is a screenshot of the post and image, which had been shared hundreds of times: 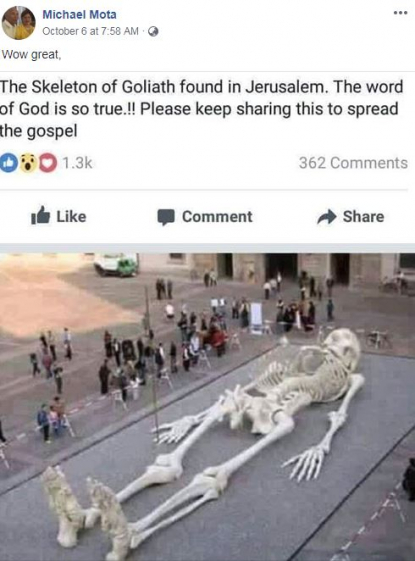 A reverse image search found that the photo first appeared online in 2007 on the Flickr photo-sharing account of a man named Mauro Pipponzi.

Pipponzi confirmed to AFP that he had taken the picture and said it showed the “Calamita Cosmica” or “Cosmic Magnet” -- a sculpture by Italian artist Gino De Dominicis.

The sculpture has been shown several times in public, including in Foligno, Italy and Florence, Italy.