No, this is not a screengrab showing a major Indian TV channel report on a Sikh regiment refusing to fight

Multiple posts on Facebook and Twitter and mainstream television channels in Pakistan have shared a screengrab they claim shows a report by a major Indian TV channel on a Sikh regiment refusing to fight for India. The claim is fake; the screengrab is a doctored version of an old report by the TV channel.

The misleading posts, for example here and here on Twitter, and here on Facebook, contain a doctored screengrab of a report by prominent Indian channel Republic TV.

The text across the screengrab says: BREAKING NEWS 21 SIKH REGIMENT REFUSED TO FIGHT FOR INDIA

India and Pakistan have engaged in aerial dogfights and exchanged fire in disputed Kashmir after a suicide attack last month killed 40 Indian paramilitaries. Here is an AFP report on the situation.

Pakistan television channel Abbtakk News used a tweet containing the doctored image as the basis for a news segment which they shared on their Facebook page, where it has been viewed 14,000 times since it was posted March 5, 2019.

Below is a screenshot of the news segment and the doctored image: 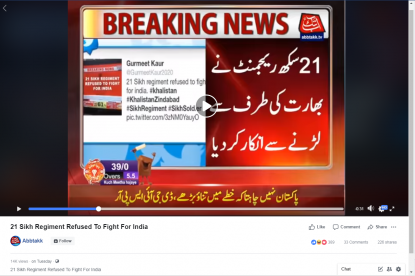 The doctored screengrab was also used by YouTube channel “Voice of East” during a March 6 broadcast discussing India-Pakistan tensions.

Below is a screenshot of the image used during the discussion: Screenshot of the misleading image on Pakistan news show

Below is a side by side comparison of the original (left) and doctored images (right). AFP has circled key features in both images which are exactly the same:

Comparison of original and doctored image

In a tweet in Hindi the channel said: "Thank you Indian Army for the tweet. Republic TV always stands with army. Those who are spreading fake news their intentions have failed. Indians have rejected the propaganda and fake news by Pakistan. The whole nations stands in unity with Army."

The doctored image has also been debunked by fact checking organisations such as Altnews.in and Boom Live.