No, this is not a real tweet by Indian journalist Sweta Singh in support of Prime Minister Modi

An image shared thousands of times on Facebook purports to show a tweet by prominent Indian journalist Sweta Singh expressing support for Prime Minister Narendra Modi. The claim is false; the Twitter handle in the picture is different to Singh’s verified account and there is no record of her posting any such tweet.

The false image has been shared more than 2,000 times in this Facebook post by a page called "Modi Mania" published March 21, 2018.

It purports to show a Hindi-language tweet from journalist Sweta Singh, a newsreader and executive editor for Indian TV channel Aaj Tak. Here is her verified Facebook page.

Translated to English, the supposed tweet says: "Every government has limitations, but looking at the hate for Narendra Modi by anti-national forces, we are even more determined to stand by Modi ji. Long Live India".

Ji is a term used to show respect to elders. 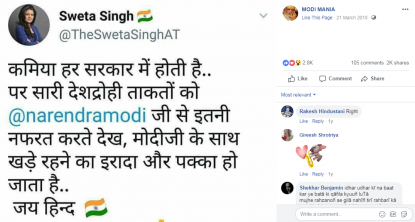 Modi is seeking re-election in Indian polls which began April 11 and run until May 19. Here is an AFP story about the election. 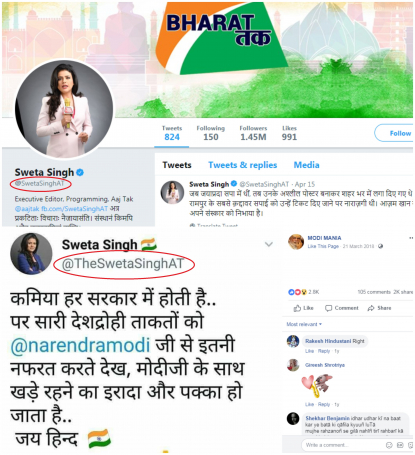 Searching for the Twitter handle in the false image found that @TheSwetaSinghAT has been suspended and replaced by this information page.

Below is a screenshot of the page that appears after clicking on a link to that Twitter account:

The same pro-Modi message seen in the purported tweet has been posted elsewhere on social media – for example here, here and here on Twitter, and here on Facebook – without reference to Singh.

Searching Sweta's verified Twitter account @SwetaSinghAT for the first line of Hindi-language text from the message, which means "every government has limitations", found no results.

Below is a screenshot of that search on Twitter:

Singh’s name and an Indian flag emoji appear in the false post alongside a headshot that can also be seen on her website here.

Below is a screenshot of the 'About Me' page on Singh's website featuring the same photo:

Singh has previously referred to imposter social media accounts set up in her image, for example in this tweet dated February 17, 2017, which says: "fake account. I'm not on fb yet".

This tweet dated May 24, 2018, says: "You tag the correct id and blame it for a tweet by a fake one? How am I responsible? At least learn about ‘verified’ handles before learning how to troll".

You tag the correct id and blame it for a tweet by a fake one? How am I responsible? At least learn about ‘verified’ handles before learning how to troll

Another account using Singh’s photograph and name – spelt wrongly as “Shweta singh” – exists on Twitter here with the handle @IShwetaSinghAt. It has more than 1,700 followers.

Its timeline, seen in the screenshot below, contains many tweets praising Narendra Modi’s government and its policies and criticising the opposition: 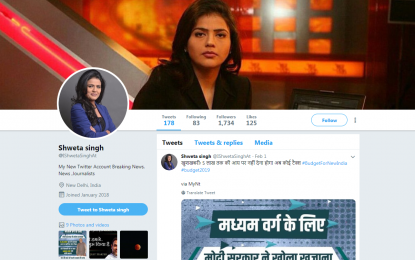