No, this is not a real photo of Pakistani Prime Minister Imran Khan with a religious minority leader after a 'secret meeting'

An image shared thousands of times in multiple Facebook posts purports to be a screenshot of a television report showing Pakistani Prime Minister Imran Khan with a leader of a religious minority group after a secret meeting. The claim is false; the photo has been doctored from an original photo taken in November 2016 which did not include Imran Khan.

The photo in the misleading posts appears to show Mirza Masroor Ahmad, an Ahmadi leader, with Imran Khan. In the doctored image, Khan's face has been circled in red.

The Urdu language text on the photo states: “Breaking news. Photo of a secret meeting of Prime Minister Imran Khan with Masroor Qadiani (Ahmadi) has come to fore.”

“Masroor Qadiani” refers to Mirza Masroor Ahmad. This is a profile about him on an official website for the Ahmadiyya Muslim Community.

The Urdu language caption in the post translates to English as: “That’s why arrests are being made, so that Qadianis can roam freely. People of Pakistan do recognise these Qadianis.”

“Qadianis” is a term used to describe Ahmadi Muslims. This article published by the Dhaka Tribune newspaper on February 13, 2019, references the term.

The Ahmadis are described as non-Muslims in Pakistan's constitution, which can be seen here, with the relevant section on Page 170. This Human Rights Watch report published in 2018 describes Ahmadis as a persecuted religious minority in Pakistan.

A “24 News HD” logo has been added to the bottom right hand corner of the photo.

24 News HD is an Urdu language television channel based in Lahore. There are no reports about the purported secret meeting on the official 24 News HD website.

The photo in the misleading Facebook posts was also shared on Facebook here and here with the same claim.

The photo in the misleading posts has been doctored from an original image of Mirza Masroor Ahmad without Imran Khan, which was posted here on Twitter on November 14, 2016: The image was shared on the verified Twitter account of MTA International, which describes itself on its official Facebook page as a broadcasting company based in London.

Below is a screenshot comparison of the doctored photo in the misleading Facebook posts (L) and the image tweeted by MTA International (R):

Imran Khan does not appear in the MTA International photo.

The photo tweeted by MTA International includes a caption which states the photo of Mirza Masroor Ahmad was captured at “Fazl mosque”.

A Google reverse image search found that the image of Imran Khan in the doctored photo has been taken from this original Associated Press photo taken in March 2019.

Below is a screenshot of the image on the AP website: 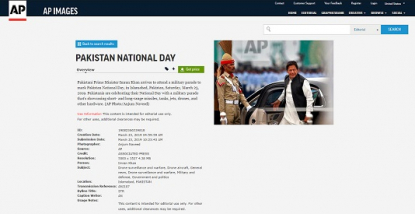