No, this is not a photo of a Pakistani commando

Posts on Facebook that have been shared hundreds of thousands of times carry a photo of a partially submerged person in military uniform holding a weapon, alongside text and visual references to Pakistan and the Pakistani military. The posts are using the photo in a misleading context; it is of a French combat diver.

Multiple Facebook posts such as this one, which has been shared more than 392,000 times since it was posted on December 31, 2016, contain a photo of a commando standing in water up to his shoulders with a weapon in his hands and his head and face covered by a camouflage net.

The post's caption says, in Urdu: "He who is not a Pakistani will not share this. Please share and show this to the entire world".

In the top corner of the image, superimposed on the photo of the commando, there is a Pakistani flag and text that says, translated into English: "Long Live Pakistan".

Additional text written in Urdu beneath the photo in the image says: "ASG commandos can go to any distance for our protection. Give proof of your love by giving countless likes."

There is no ASG in Pakistan’s military, however there is the well-known Special Services Group, or SSG.

Here is the official Pakistan Navy site about the SSG, which describes the unit’s underwater activities. 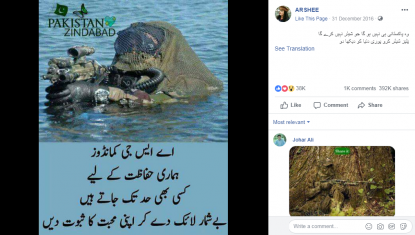 The same image has been shared elsewhere on Facebook with the same caption, for example here on September 25, 2018 with nearly 350 shares.

A Google reverse image search found that the photo of the commando appeared in an online article advertising a waterproof watch made by Ralf Tech, a French-Swiss company.

The article was published in French here on the site montres-de-luxe.com, meaning "luxury watches".com, on November 28, 2011.

Below is a screenshot of the picture as it appears in the article: 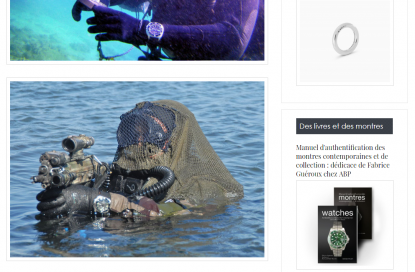 Screenshot of the article on montres-de-luxe.com

Details of the same watch model appear here on Ralf Tech’s website, which says it is worn by the French Navy.

The Ralf Tech website says: "The WRX « A » Hybrid does not need introduction; it is the result of year of joint development of RALF TECH engineers and frogmen from the Commando Hubert of the French Marine Nationale. The WRX "A" Hybrid has been operating in the elite units of the Marine Nationale since 2010."

A statement from the French Navy press office, emailed to AFP, confirmed that the photo was of a French combat diver.

"We can confirm that the picture you submitted to us is the one of a French naval combat diver, and that it was probably used for the watch advertisement," the statement said.