No, this is not a photo of a Muslim woman holding a placard in support of Indian Prime Minister Narendra Modi

Multiple Facebook posts have shared a photo purportedly showing a Muslim woman holding a placard supporting Indian Prime Minister Narendra Modi ahead of general elections starting April 11. The photo has been doctored from an image used in a campaign against the stereotyping of Muslims in America in 2012.

The doctored image has been posted repeatedly on Facebook, for example here and here, and shared hundreds of times since it was uploaded March 10, 2019.

The doctored image shows a woman wearing a headscarf and holding a placard with a message in Hindi.

Below is a screenshot of the doctored image: 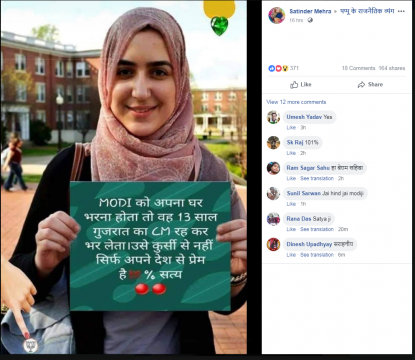 Screenshot of the doctored image

A translation of the Hindi message on the placard reads: “If Modi was to feather his nest, he would have done when he was the chief minister of Gujarat for 13 years. It proves he doesn't love the chair (authority) but his love for his country is 100% true.”

In elections, which will run from April 11 to May 19, 2019, Modi and his Bharatiya Janata Party (BJP) are seeking a second term.

While in office, the BJP has been accused of fanning anti-Muslim sentiment. AFP reports on the issue can be seen here and here.

A Google reverse image search found the photo in the misleading Facebook posts was actually from a 2012 campaign against the stereotyping of Muslims in the US.

The campaign was held at the University of Mary Washington in Virginia. More photos from and details about the campaign can be seen here and here.

Below is a screenshot of the original image: 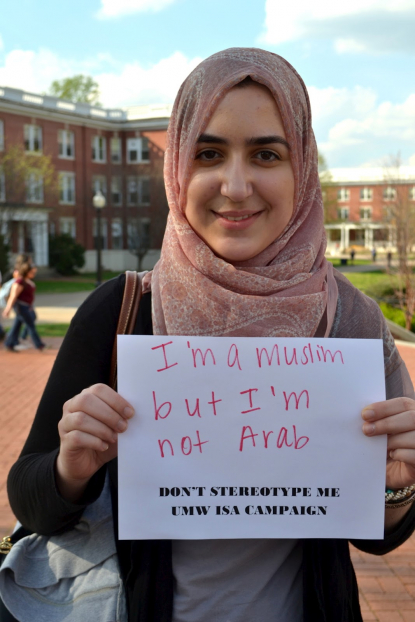 The writing on the placard is in English, not Hindi and there is no mention of Modi.

The original image has also been doctored to include a hand pointing to a BJP lotus flower symbol on the woman's bag. AFP has circled the addition in red in the screenshot of the misleading image below: 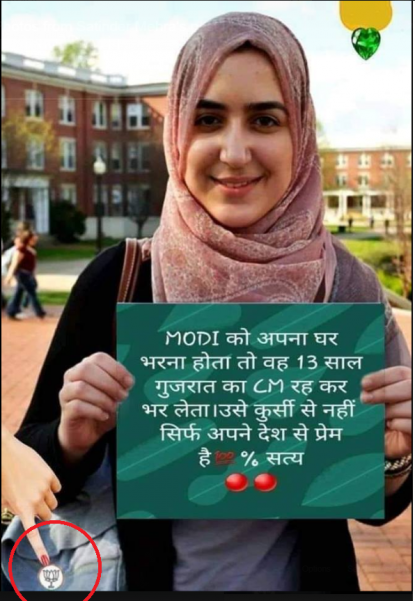 Below is a screenshot from the BJP Facebook page, showing their lotus flower symbol: