No, this is not a photo of a mass grave in Pakistan being dug after Indian airstrikes

Multiple social media posts share a photo they claim shows a mass grave being dug in Pakistan after Indian airstrikes in Balakot. The claim is false; the photo actually shows a grave being dug in February 2013  in the southwestern Pakistani city of Quetta for the victims of a market bomb targeting Shiite Muslims.

The image, which can be seen here on Facebook where it has been shared more than 700 times since it was posted March 3, 2019, shows people digging a mass grave as a crowd watches.

The Hindi-language caption says: “Mass graves are being dug in Pakistan for past 4 days, even then you are stuck on the proof."

India said February 26, 2019 that it had carried out airstrikes killing a large number of militants in Balakot. Here is an AFP story about the strikes.

The same misleading photo and claim have also circulated on Twitter, for example here and here.

A report by the New York Times on February 17, 2013, carries an Associated Press photo of the same mass grave from a slightly different angle.

Below is a screenshot comparing the two images. AFP has circled key identifying markers that are the same in both images, including a grave digger, a van with a satellite dish, and a rocky structure in the background:

Here is a screenshot of the Associated Press photo, credited to photographer Arshad Butt, on the AP website: 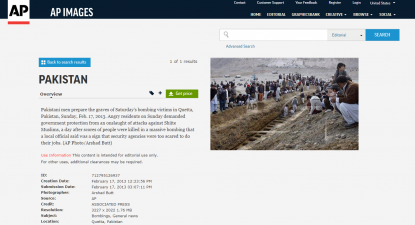 The caption says: “Pakistani men prepare the graves of Saturday's bombing victims in Quetta, Pakistan, Sunday, Feb. 17, 2013. Angry residents on Sunday demanded government protection from an onslaught of attacks against Shiite Muslims, a day after scores of people were killed in a massive bombing that a local official said was a sign that security agencies were too scared to do their jobs. (AP Photo/Arshad Butt).”

The same scene was captured by Reuters photographer Naseer Ahmed on the same day.

Below is a screenshot of the photo on the Reuters website:

Below is a screenshot comparison of the misleading social media photo shared and the photo of the same grave captured by Reuters. AFP has circled in red three men who are seen in both pictures:

AFP also photographed the same scene, but from a different angle. The photographs can be seen here.