No, this is not a photo of an Indian minister defacing a poster of Prime Minister Narendra Modi

Multiple social media posts have shared a photo which they claim shows Indian state minister Sachin Pilot defacing a poster of Prime Minister Narendra Modi. The claim is false, the man in the photo painting black ink onto Modi’s face is a local youth leader in Mumbai.

The post contains a photograph which shows a man painting black ink onto a poster of Indian Prime Minister Narendra Modi. 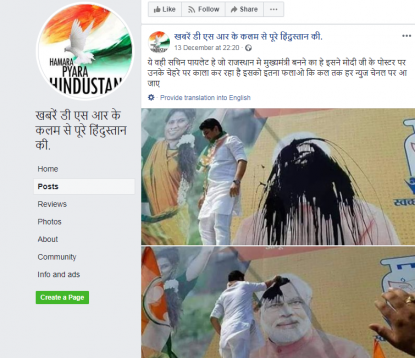 Because of the angle of the photograph and the lighting it is difficult to see the man’s face clearly.

The caption in Hindi says: “He is the same Sachin Pilot, who is set to become the chief minister of Rajasthan, putting black ink on the face of Narendra Modi. Spread this extensively so that it draws attention of all the media.”

Sachin Pilot is a Indian National Congress Party politician who was sworn in as deputy chief minister of Rajasthan on November 17, 2018.

A reverse image search on Google found the original video was posted on October 11, 2018 on the verified Twitter account of Youth Congress leader Satyajeet Tambe from the western state of Maharashtra.

The footage shows Tambe defacing the Modi poster as part of a protest against a fuel price hike.

The October 11 protest happened in the financial capital of Mumbai and was widely reported on by local media at the time.

The video was uploaded by Tambe with a caption in Marathi saying: “Modi looted through petrol, gas and diesel, there should be a ban on BJP’s publicity.”