No, this is not a photo of a girl lost at a railway station in northern India in 2019

A photo of a distressed young girl with a female police officer has been shared hundreds of thousands of times in Facebook posts which claim the child was found in the north Indian city of Bareilly on a train coming from Mumbai. The posts urge Facebook users to share the image to help reunite her with her family. But the photo is actually a 2016 image which shows a girl who was briefly separated from her parents at a railway station in the central Indian city of Nagpur.

The caption in Hindi alongside the photo translates to English as: “This girl was found in Bareilly in an oncoming train from Mumbai. Her name is Sonal Patel, share so that she can be reunited with her parents.” 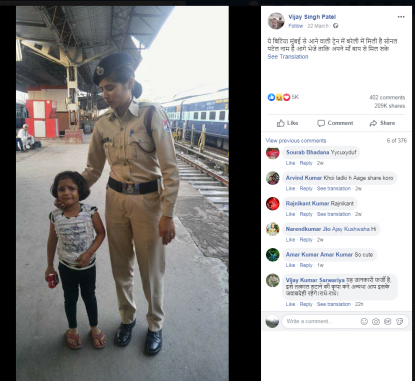 The picture was also shared here, here and here on Facebook, and here on Twitter with the same claim.

The claim is false; the photo actually shows a girl called Avani Jain, who was briefly separated from her family at Nagpur Railway Station in May 2016.

A reverse image search on Google found the exact same photo was published on the website of newspaper The Indian Express in this report on May 17, 2016.

The report is headlined: “Social media turns a blessing: Avani’s missing photo goes viral, and she gets her mother back in 20 minutes.”

The second paragraph of the report says: "The photo showed the girl holding a lady railway police official’s hand. Soon, the photo was shared by one of the officials and it spread to nearly 200 whatsapp groups within minutes.

"In 20 minutes of the picture going viral, the girl, who was travelling with her mother and family from Nagpur to Bhopal, with the help of the railway police, could trace her mother Sunaina Jain and relatives." 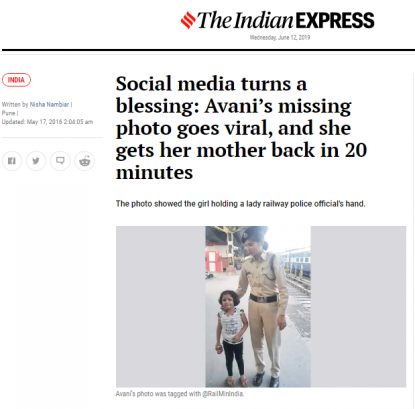 Snapshot of the news report

The incident was also reported by multiple news websites at the time, for example here on the Huffington Post and in this post on Medium, which also includes photos of the girl reunited with her father.

Then-Indian Railway Minister Suresh Prabhu tweeted about the incident here after the child was reunited with her family:

Joyous moment for us to see Avani with her parents.We strive hard, for runaway,missing children. MR monitors himself https://t.co/1SzmL508Ak

No, 400 million eggs have not been recalled in Canada