No, this is not a photo of ‘the first Muslim major general in the United States Air Force’

An image has been shared hundreds of times in multiple posts on Facebook, Twitter and Instagram which claim it shows the first Muslim major general to lead a unit in the United States Air Force. The claim is false; the image has been doctored from an original photo of a different woman. 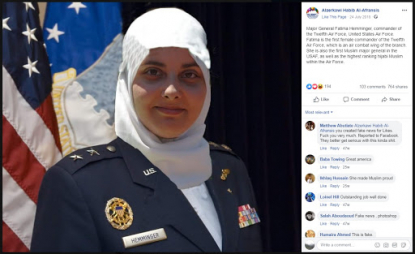 The same image was shared here and here on Facebook with a similar claim.

The claim is false; the image has been doctored from an original photo of a different woman, who is a US Air Force major general.

Below is a screenshot of the original photo: 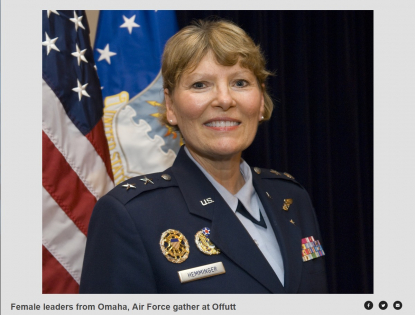 The caption of the photo states: “Maj. Gen. Linda S. Hemminger met with female leaders in Omaha at the Ten Dinner Aug. 14 in the Patriot's Club at Offutt Air Force Base, Neb. General Hemminger is mobilization assistant to the deputy surgeon general of the Air Force. (U.S. Air Force photo/Lance Cheung)”.

Linda Hemminger was a Major General in the United States Air Force and retired on June 15, 2009, according to this biography published on the US Air Force database.

A keyword search for ‘Fatima Hemminger’ on the US Air Force website here only shows results for Linda Hemminger.

According to US Air Force website here, Major General Andrew Croft is currently the commander of the US Air Force Twelfth Air Force unit.

No, these photos do not show students walking out of a Philippine opposition senator's speech

No, these photos do not show Kenyan women protesting against a ‘lack of men to make them pregnant’