No, this is not a photo of dead cows in India

A photo has been shared tens of thousands of times on Facebook and Twitter in May 2019 alongside a claim that it show dead cows in the western Indian state of Rajasthan. The claim is false; the photo was first published online in 2009 in reports about cows which died while awaiting slaughter in Kenya.

The Hindi language caption in the post translates to English as: “This is the reality of cow service. Hundreds of cows have died due to hunger in Rajasthan. Where are those people asking for votes in the name of cow?”

India's 2019 election is currently underway, with results due on May 23. Here is an AFP report on the process.

The cow is a sacred animal in Hinduism. India's ruling Bharatiya Janata Party has previously included cow protection in its election manifestos, and top party figures have campaigned on the issue in 2019.

The photograph does not show dead cows in India's Rajasthan in 2019; the image first appeared online in reports about cows that died while awaiting slaughter in Kenya in 2009.

A reverse image search on Google found the exact same photo was published in an online slideshow here by Kenyan newspaper, The East African. The caption states: “A truck offloads dead cows for burial in Athi River on Thursday. Hundreds of cows have died at the Kenya Meat Commission while awaiting slaughter. Photo/ABEL MOSINGISI.”

A cropped version of the photo was also published here in a report by Kenyan newspaper The Daily Nation on October 3, 2009, with the same caption. 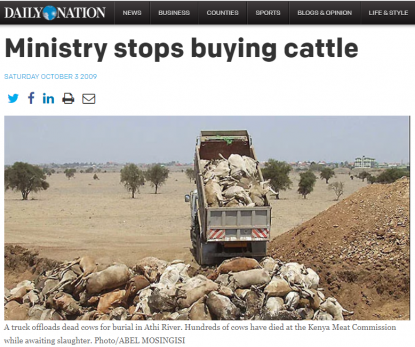 Screenshot of the image published on Kenyan news website

No, this is not a real photo of an Indian chief minister running away from a policeman