No, this is not a perfectly-timed photograph of the moon hovering over a radio telescope

A picture of a super moon perched above a radio telescope has repeatedly gone viral in recent years. Multiple websites claim it is one of the most amazing photographs ever taken which did not use Photoshop. New Zealand photographer Chris Pegman told AFP it was a composite image created from two pictures using editing software. 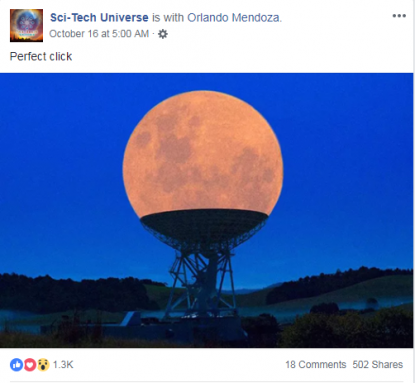 The image has previously gone viral -- for example here in 2016 when CrowdTangle data showed it was shared by pages with more than a million followers -- along with claims that it was a perfectly timed photo and not digitally manipulated.

Multiple websites -- for example here and here -- claim it is one of the best photographs ever taken without using Photoshop editing software.

Pegman told AFP it was a composite image. He said he had taken two separate images, shot a year apart and in different locations, and then merged them in Photoshop.

“I did not shoot this photo just when the super moon passed over the telescope. It is a composite image made with photo editing software Photoshop,” Pegman said in an email.

“The radio telescope panorama, located around an hour North of Auckland at Warkworth, was taken 2014,” he said.

“About a year later, I shot a rising full moon from my home in the Bay of Islands. I put them together,” Pegman said. 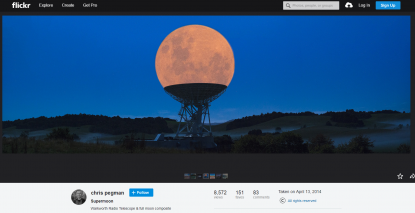 “Sadly, it was cropped -- my explanation of this being a composite was lost -- and went viral on Twitter with the title 'Perfect Framing, Perfect Timing' and has been featured goodness knows how many times in articles with titles like '30 perfect photos you won't believe aren't Photoshopped'”, Pegman said.

Photo website 500px wrote in 2015 that the composite image had been cropped and shared without crediting the photographer.