No, this is not footage of Cyclone Fani in the Bay of Bengal

Multiple Facebook posts have shared a video alongside a claim that it shows a ship in huge waves caused by Cyclone Fani tracking over the Bay of Bengal. The claim is false; the footage has circulated online since at least 2016; Cyclone Fani made landfall India on May 3, 2019.

The video has been posted repeatedly on Facebook, for example here on May 3, 2019, where it has been viewed over 2,600 times.

A caption says: “Cyclone ‘FANI’ continues to strengthen as it tracks over the ‘BAY OF BENGAL’...”

The video and misleading claim have been shared repeatedly on Facebook, for example here. 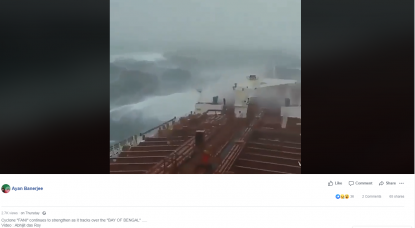 Here is an AFP report on Cyclone Fani in India and Bangladesh.

Cyclone Fani made landfall at around 0930 IST (0400 GMT) on May 3, 2019 over India's eastern Odisha state, according to this tweet by India’s Meteorological Department.

THE EXTREMELY SEVERE CYCLONIC STORM “FANI” LAY CENTERED AT 0930 HOURS IST OF TODAY, 03rd MAY, 2019 NEAR LAT. 19.80N AND LONG. 85.70E OVER ODISHA COAST CLOSE TO PURI. LATEST OBSERVATION INDICATES THAT THE EYE OF THE SYSTEM HAS COMPLETELY MOVED INTO LAND BY 1000 HRS IST OF TODAY. pic.twitter.com/tsJ87o1NpD

But the footage does not show Cyclone Fani -- the exact same footage has been online since at least 2016.

The footage was posted here on Russian social media on November 17, 2016, with a caption saying: "A level 12 storm on the Beaufort scale".

The Beaufort Scale is an empirical measure that relates wind speed to observed conditions at sea or on land, according to this post on the Royal Meterological Society website.

At 1:30 in the original footage, the camera pans to the right; at 0:16 in the shorter, cropped clip in the misleading Facebook post, the camera also pans right.

The original 2016 footage is embedded below:

The footage has circulated widely online, for example it was posted here on YouTube on May 23, 2018, with an Arabic language caption claiming it showed the Arab Sea and here on a Polish language website which claimed it was a storm in the North Sea.

The same footage was also posted here on Twitter by severe-weather.EU on March 1, 2019.

No, this is not a genuine report about the UN secretary-general congratulating Indonesian presidential hopeful Prabowo Subianto