No, this is not an accurate comparison of how Russia welcomes Indian and Pakistani leaders

A video that has been viewed hundreds of thousands of times on Facebook claims to compare the official welcome accorded to Indian and Pakistani leaders by Russia. The video is misleading; it shows India’s Prime Minister Narendra Modi arriving in Russia's capital Moscow for a bilateral summit, while Pakistan’s then-Prime Minister Nawaz Sharif is seen landing in the smaller city of Ufa for a regional summit.

The misleading posts are headlined: “How Other Countries Treat India and Pakistan” and have a caption saying: “I feel so sad for Pakistan for losing its respect!”

The writing across the top of the video says: “How Russia welcomes”. 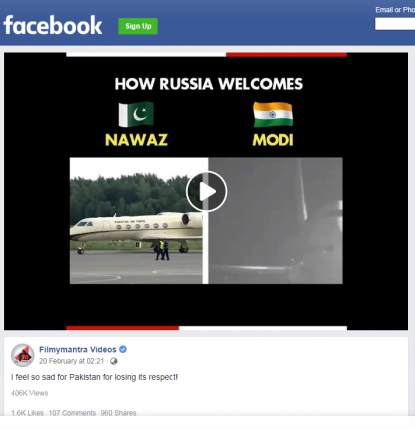 The “Nawaz” clip shows a small jet with “Pakistan Air Force” written on its side taxiing to a halt. Nawaz Sharif can then be seen walking down the aircraft’s stairs onto the tarmac where he is greeted by a small group of formally dressed people.

The “Modi” clip shows Narendra Modi walking out of a large, double-decker plane onto a red carpet. A military band is lined up along the red carpet and plays for Modi, before an honour guard of soldiers marches past.

The misleading footage of Sharif actually shows Pakistan’s then-Prime Minister arriving in Ufa, a small city in Russia, on July 8, 2015 ahead of a regional summit.

The footage in the misleading clip is an edited version of video posted to YouTube, which can be seen here.

The video’s caption reads: “Pakistani Prime Minister Nawaz Sharif touched down at Ufa International Airport in the Russian Republic of Bashkortostan, Thursday, to take part in the final day of the seventh BRICS summit before attending a meeting of the Council of Heads of State of the Shanghai Cooperation Organisation (SCO).”

The misleading footage of Modi actually shows the Indian Prime Minister arriving in Moscow on December 23 2015, for an annual India-Russia summit.

The exact same footage as is used in the misleading clip was posted online as a livestream by Ruptly and can be seen here.

Modi also attended the 2015 Ufa summit. Here is a livestream video posted online by Ruptly on July 8, 2015 of his arrival in Ufa.

There is no red carpet or military band in the footage of Modi’s arrival at Ufa.

Below is the live video of his arrival: