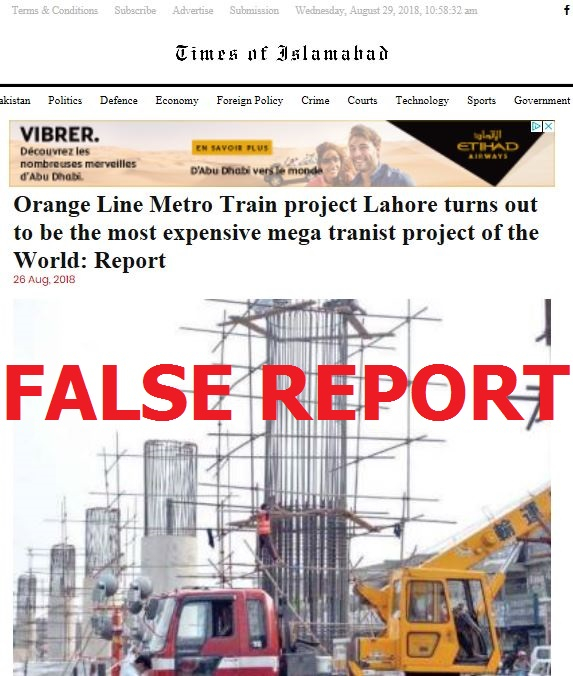 No, a metro line being built in the Pakistani city of Lahore is not the most expensive mega transit project in the world

A report says the Orange Line, a new metro rail system being constructed in Lahore, has become the most expensive mega transit project in the world. Studies show there are several projects in other countries that are more expensive, both overall and per kilometre.

The Times of Islamabad published a report on August 26, 2018 headlined: “Orange Line Metro Train project Lahore turns out to be the most expensive mega tranist project of the World: Report”.

“The 27-kilometer metro train project is estimated to cost over $1.65 billion,” the report says.

New York City’s Second Avenue Subway cost more than that, according to a report by the Regional Plan Association, an American not-for-profit regional planning organization.

“It took the MTA eight years and $5.57 billion (with contingency costs) to build phase one’s three-mile [five-kilometer] segment,” according to the report.

The New York Times has also described the Second Avenue Subway as the most expensive mile of subway track on earth.

Lahore’s Orange Line, a 27.1 kilometre project, will cost just under $1.5 billion dollars (without contingency costs) with a per-kilometre cost of $54.5 million, according to the Punjab Masstransit Authority.

The RPA report said the New York subway far exceeded the per-kilometer costs of the metros mentioned in the EJTIR paper.

“The Second Avenue Subway (SAS) has the dubious distinction of being the most expensive subway extension in the world at a cost of $807 million per track mile for construction costs alone,” the RPA report says.

The article in the Express Tribune newspaper on which the misleading Times of Islamabad report is based says only that the Lahore metro project has an unusual cost breakdown, not that it is the most expensive mass transit project in the world.

“The Lahore Orange Line Metro Train (OLMT) project will be the only mass-transit project in the world that will have higher rolling stock and allied infrastructure cost than civil structure,” the Express Tribune report said.