No, Indian cricketer MS Dhoni was legitimately run out because New Zealand had permitted number of fielders outside circle

An image has been shared shared thousands of times in multiple posts on Facebook, Twitter and Instagram which claim the umpire in the semi-final of the 2019 ICC Cricket World Cup should not have declared India's batsman MS Dhoni "run out" because opponents New Zealand had too many players placed outside the inner circle at the time, flouting rules on fielding placements. The claim is false; New Zealand had the permitted number of fielders outside the circle when Dhoni was run out.

The misleading post was published here on Facebook on July 10, 2019. It has been shared more than 700 times. It contains a screenshot from the cricket World Cup semi-final match played in the UK city of Manchester the same day. 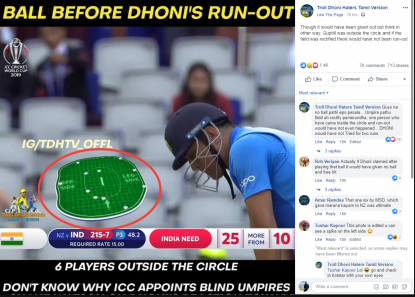 The text on the photo states: “Ball before Dhoni’s run-out. 6 players outside the circle. Don’t know why ICC appoints blind umpires.”

The caption alongside the image reads: “Though it would have been given out but think in other way, Guptill was outside the circle and if the field was rectified there would have not been run-out.”

The misleading post was also shared here on Instagram garnering more than 50,000 likes and here on Twitter by an Indian journalist, from which it was retweeted thousands of times.

Several Indian media also reported on the incident, for example here and here.

The claim is false; New Zealand had the permitted number of fielders outside the circle when Dhoni was run out.

Here is footage of the moment Dhoni was run out on the International Cricket Council's website.

The screenshot published in the misleading posts shows the state of play just before the ball that saw Dhoni run out.

The horizontal line of information at the bottom of the screenshot says the Indian team has “215 runs for 7 wickets” in “48.2” overs. “P3” written beside it refers to the third Powerplay -- the last ten over a period in the game when the number of fielders outside the inner circle is limited to five, as stated in ICC rules here.

The cricket ground is represented in a green circular graphic. The white dots show where fielders are standing on the pitch -- six of them are positioned outside the small white ring, known as the inner, or 30-yard-circle.

AFP analyzed the footage of the match highlights available on ‘Hotstar’ -- a mobile streaming app available in India.

Footage reviewed by replaying part of the match on the app shows there were indeed six fielders outside the inner circle at the 48.2 over mark -- with the same score and runs required as shown in the misleading post. However as bowler Lockie Ferguson was about to run in to deliver the ball, the replay shows he changed the field, calling the third man (also known as fly slip) up from near the boundary to within the 30-yard-circle, leaving five fielders outside the inner ring -- the maximum permitted at that point of the game under ICC rules.

The same Hotstar screenshot is shown below, with the original position of the fielder -- the third man -- circled in red and labelled ‘A’. The position he was moved up to within the inner circle -- short third man is labelled ‘B’. 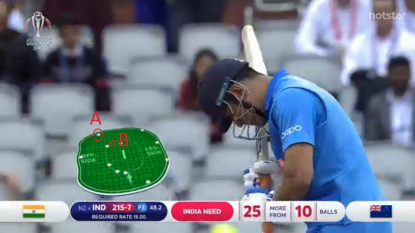 Below is another screenshot from the app, taken as the bowler is into his run-up. The red-highlighted sections labelled ‘B’ and ‘C’ show the white markings of the ‘inner’ -- or 30-yard-circle. The section marked ‘A’, in the top right corner, shows the lower part of a New Zealand fielder’s legs. This shows that the player at point ‘A’ was inside the inner circle, and only 5 fielders were outside it.

The cricket pitch graphic in the initial post already shows the fielder has gone back to fine leg -- the white dot at the top right -- outside the inner circle.

​The fielder who moved up to short third man -- Colin de Grandhomme -- came up to the stumps when Dhoni was run out. The rules dictate he was permitted to do this because he was inside the inner circle and close to the wicket.

Below are three screenshots of consecutive images taken from the hotspot replay of the match, showing De Grandhomme running from short third-man position towards the stumps for the runout: 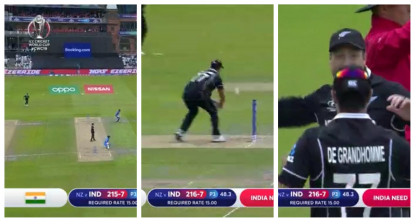 Below is a collage of screenshots showing the same sequence of events in Dhoni’s run out: