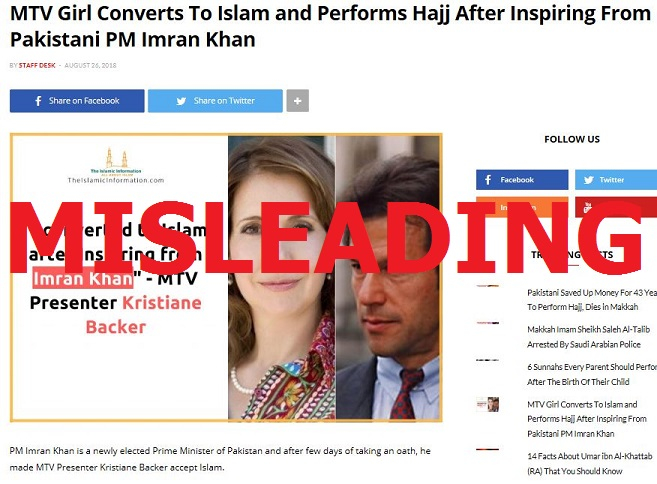 No, former MTV presenter Kristiane Backer was not converted to Islam by Imran Khan after he became Pakistan's prime minister

An online posts states former MTV presenter Kristiane Backer was inspired to convert to Islam by Imran Khan after he was sworn in as Pakistan’s prime minister on August 18, 2018. Backer has repeatedly said publicly that Khan influenced her conversion to Islam, but she became a Muslim in 1995.

The August 26 post on theislamicinformation.com website is headlined: “MTV Girl Converts To Islam and Performs Hajj After Inspiring From Pakistani PM Imran Khan”.

The post states: “PM Imran Khan is a newly elected Prime Minister of Pakistan and after few days of taking an oath, he made MTV Presenter Kristiane Backer accept Islam”.

Backer has said many times, such as in an interview posted on Youtube in 2013, that Khan taught her about Islam and influenced her decision to become a Muslim. Below is the interview.

Backer’s official website also states that she became a Muslim in 1995 following a “fateful meeting” with Khan.

Backer was a presenter with MTV Europe in the early 1990s.