Facebook and Instagram posts shared tens of thousands of times in the United States, and also in Saskatchewan, Canada claim that face masks laced with anesthetic are being distributed by criminals posing as government officials so that they can steal from their victims. Police dismissed the claim as a scam.

“People are going door to door handing out masks. They say it’s a new initiative from local government. They ask you to please put it on to see if it fits. It’s doused with chemicals which knocks you out cold. Then they rob you!!” claim the posts. The warning started circulating in late March 2020. 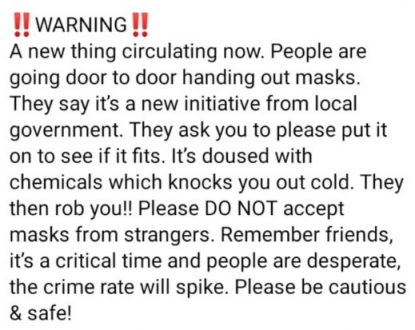 One April 5, 2020 post from a user whose profile says she is based in the US state of Georgia was shared more than 41,000 times. The claim also circulated on Instagram here, here and here. 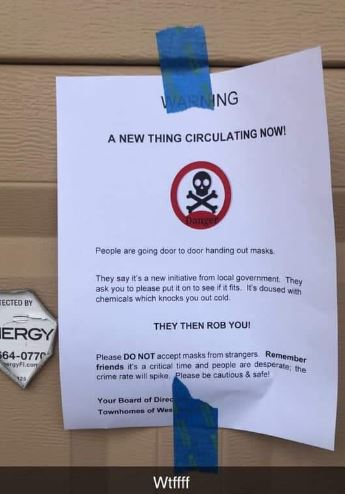 Another view of the poster shows that it appears to have been put up by the board of directors at the Townhomes of Westbay Cove, a community in Tampa, Florida.

However, there is no evidence of a rash of thefts taking place after people accepted masks from strangers.

“I haven’t heard of any of that,” Jamel Laneè, a spokeswoman for the Tampa Police Department said.

Julie Clark, a public affairs official for the Saskatoon Police Service in Canada, said by email: “We have not heard of this scam in Saskatoon. Investigators have not received any reports of this.”

Colleen Book, spokeswoman for the Saskatchewan Ministry of Health, added: “Government of Saskatchewan is not handing out masks through any kind of public program and we are not sending representatives door-to-door at this time.”

Similarly, Carlos Campos of the Atlanta Police Department said via email that he was not aware of “any crime” like the one described in the post happening in the capital city of Georgia.

AFP Fact Check also debunked the claim after it circulated in Dutch.