No, this document does not show that the Pakistani government imposed a 0.6 percent tax on cash withdrawals exceeding 25,000 rupees

A photo of a document shared thousands of times in multiple Facebook posts in Pakistan purports to show a tax law amendment introduced in March 2019 which means any cash withdrawals exceeding 25,000 rupees will be subject to a 0.6 percent tax, down from 50,000 rupees previously. But the claim is false; the bank document in the photo does not show evidence of any such change to the law, the bank said; Pakistani government and tax authorities have said no such tax law amendment has been made.

This post containing the photo has been shared more than 4,000 times since it was posted on March 26, 2019 by a Facebook page called ‘Lawyers of Pakistan’, which has more than half a million followers.

Its Urdu-language caption translates to English as: “The 0.6% deduction which was imposed on withdrawal of more than 50,000 rupees, will now be imposed on 25,000 rupees. Notification issued.” 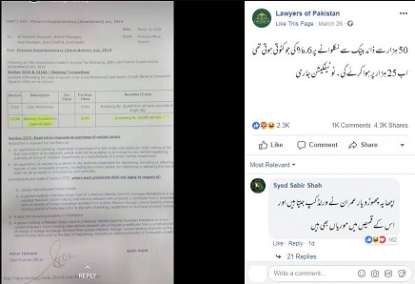 The same image has been shared with similar claims on Facebook here and here.

The post is accompanied by an image of a bank memo dated March 19, 2019, with its origin listed as “Principal Office, Karachi”. Karachi is the largest city in Pakistan.

The URL listed at the bottom of the document, “bdcprdauthapp.bank.alhabib.com”, does not lead to a bank website, but ‘Bank Al Habib Limited’ is the genuine name of a Pakistan-based bank. This is its official website.

The signatory at the bottom of the document is listed as “Ashar Hussain, Chief Financial Officer”.

In a telephone call on May 22, 2019, Hussain told AFP that the document was issued by him but said the Facebook post's caption was misleading as there was no new withholding tax on cash withdrawals exceeding 25,000 rupees.

"The circular is correct, genuine issued by the bank under my signatures. But the claim in the Facebook post is incorrect and misleading. The taxable cash withdrawal limit has not been reduced from 50,000 rupees to 25,000,” Hussain told AFP.

"The 0.6 percent withholding tax imposed on the amounts exceeding 25,000 rupees is for getting instruments like bank drafts and pay orders against cash for the non-filers and this was the case before the amendment in the law and still it is the same," Hussain said.

"Non-filers" refers to people who do not submit annual tax returns.

The Pakistani State Minister for Revenue Hammad Azhar said in this tweet on March 27, 2019 that the law had not been changed. 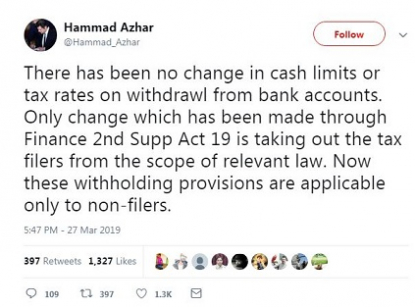 In a statement emailed to AFP on March 27, 2019, the Pakistan government’s Federal Board of Revenue (FBR) also stated that it had not revised rates or limits for tax on cash withdrawal from bank accounts under section 231A.

“The only change which has been made through Finance 2nd Supplementary Act 2019 is taking out the tax filers from the scope of both these provisions. Now these withholding provisions are applicable only to non-filers,” the statement said.

Here is a screenshot of the statement:

A screenshot of Pakistan's Federal Board of Revenue statement

The amendment to the tax law, passed by parliament in March 2019, can be viewed in an online government document here.

Below is a screenshot of the amendment on page 51 of the report:

A screenshot of the Pakistani tax law