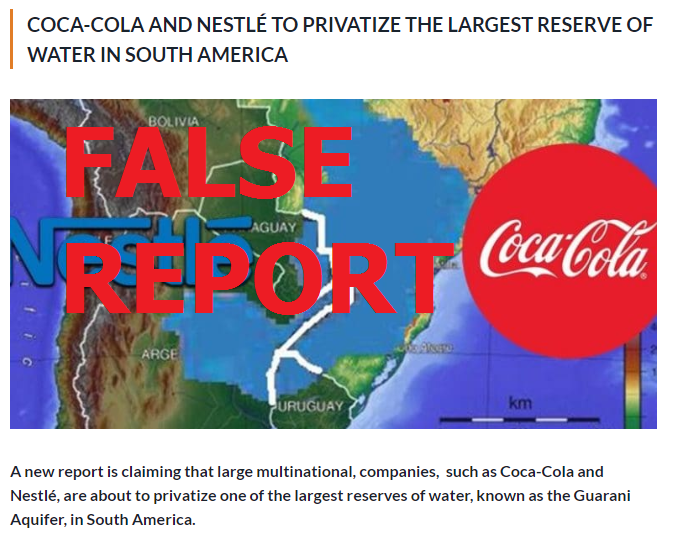 No, Coca-Cola and Nestle are not going to privatize South America’s largest water reserve

No, Coca-Cola and Nestle are not going to privatise the Guarani Aquifer, South America’s largest water reserve, as claimed in French, English and Brazilian articles shared widely online.

Numerous websites have claimed that Nestle and Coca-Cola are in talks to privatize the 1.2 million km2 aquifer, which stretches beneath Brazil, Argentina, Paraguay and Uruguay.

The articles, shared tens of thousands of times collectively on a variety of sites, claim the two multinationals are negotiating a deal with the assistance of Brazilian President Michel Temer.

The information was first shared in the Correio do Brasil in 2016,  quoting an unknown senior official at the National Water Agency, and has resurfaced more recently on sites such as Mint Press News,  with claims that talks have already reached an “advanced” stage.

However, the information is false, as the Brazilian site e-farsas.com revealed back in January 2017.

The Guarani Aquifer was never one of the 34 infrastructures which Temer had announced were to be sold by the government in order to boost the economy and bring it out of recession under the Investment Partnership Programme, an IPP spokesperson told AFP.

Launched in 2016, the sale would include national infrastructure such as mines, aeroports and energy systems.

The government denied the possibility of privatising the water source during the World Water Forum in March this year, stating that the aquifer was protected by international agreements.

According to an accord between members of Mercosur, the South American trade bloc, the Sistema Aquifero Guarani (SAG) is defined as a “transboundary water resource”.

The 2010 agreement, which was approved by the Brazilian government in 2017, also prevents nations from using water from the Guarani for private purposes if this will negatively impact neighbouring countries and the environment.

Nestle denies plans to privatise the aquifer. In a statement, the company commented that it currently “does not extract water from any part of the Guarani Aquifer” and has “no plans to do so”.

A privatisation or conferment of the aquifer would require constitutional reform as the Brazilian Constitution considers all bodies of water, whether above or below ground, as state owned.

That would require the approval of three fifths of the Senate and the Chamber, which President Temer has found difficult to achieve ahead of presidential and legislative elections this October.