No, this clip does not show Nigerian envoy en route to discuss travel ban

A video viewed more than 100,000 times has been shared in multiple tweets that claim it shows Nigeria’s ambassador to the US on his way to a meeting with President Donald Trump to discuss new travel restrictions for Nigerians. The claim is false; the video clip was circulating online long before the US government announced an expansion of the country’s travel restriction list to include Nigeria.

The claim first appeared in this tweet published on February 1, 2020, a day after the US government announced new visa restrictions on citizens of Nigeria, as well as citizens from five other countries, effective February 21, 2020. 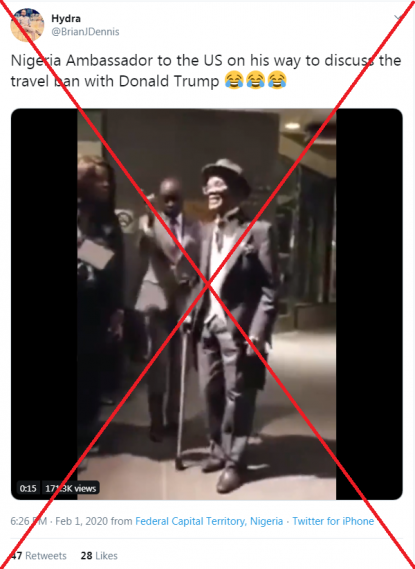 A screenshot taken on February 4, 2020 showing the misleading tweet

The 22-second clip was reposted with a similar caption in this tweet, which has been shared nearly 2,000 times. 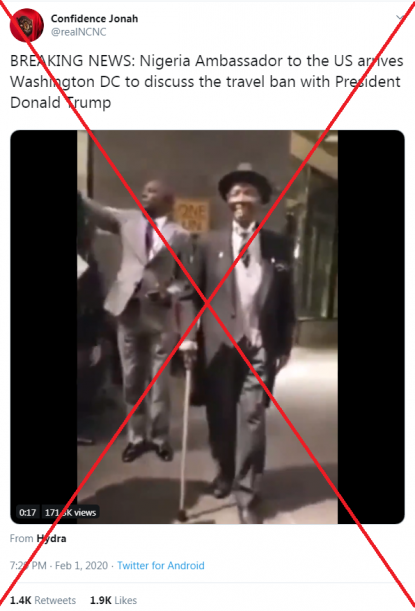 A screenshot taken on February 4, 2020 showing the misleading tweet

The video clip shows Sylvanus Adiewere Nsofor, Nigeria’s ambassador to the US, limping and using a walking stick. He is accompanied by two men, including one in Nigerian military uniform.

But the claim is false: The viral footage was already circulating on social media well before January 31, 2020, the date on which the Trump administration announced an expansion of the country’s travel ban list to include Nigeria, Myanmar, Eritrea, Kyrgyzstan, Sudan, and Tanzania.

Using the video verification tool InVID to conduct reverse image searches, AFP found that the video had been published in a tweet months earlier, back in September 2019. 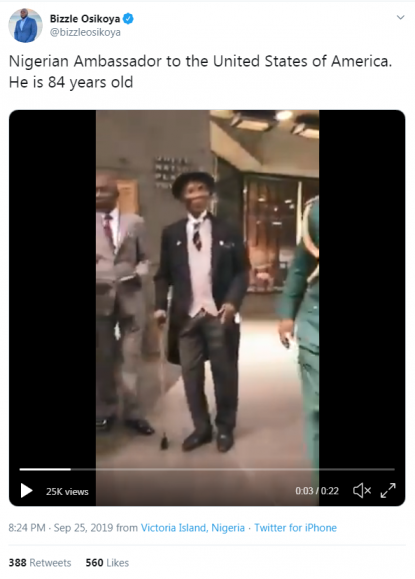 A screenshot taken on February 4, 2020 of a tweet showing the footage predates the travel ban announcement

Moreover, the video does not show the ambassador in Washington DC, as some of the misleading tweets claimed, but in New York City.

AFP tracked down another video that was filmed in the same location as the first video. It was tweeted on September 23, 2019 by Simon Ateba, a Nigerian journalist and the publisher of US-based Today News Africa.  In his tweet, Ateba said he met the ambassador when he paid a visit to Nigerian President Muhammadu Buhari, who was in New York to participate in the 74th Session of the United Nations General Assembly. 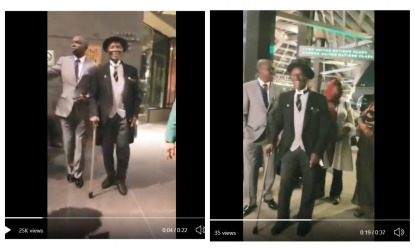 Screenshots of the two video clips

Architectural features and other matching features are visible in both of the videos and on Google Street View, including a “No Smoking” symbol and inscriptions showing “ONE UN” and “United Nations Plaza Tower” (see below). 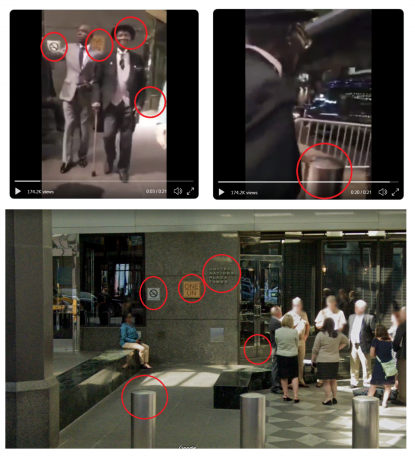 Screenshots taken on February 5, 2020 of tweets showing similarities between the video clips and a Google Street View image

Matching features are also visible when looking from a different direction in Google Street View. 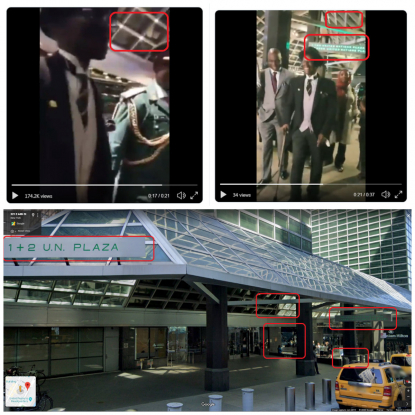 Screenshots taken on February 5, 2020 of tweets showing similarities between the video clips and a Google Street View image

Nsofor, 84, is a retired justice from Nigeria’s Court of Appeal whose nomination as a non-career ambassador was at first rejected by Nigeria’s senate amid concerns about his age.

Since his appointment was confirmed in June 2017, following a second nomination by Nigeria's president, Nsofor’s age and physical appearance have become a recurrent subject of debate in Nigeria.