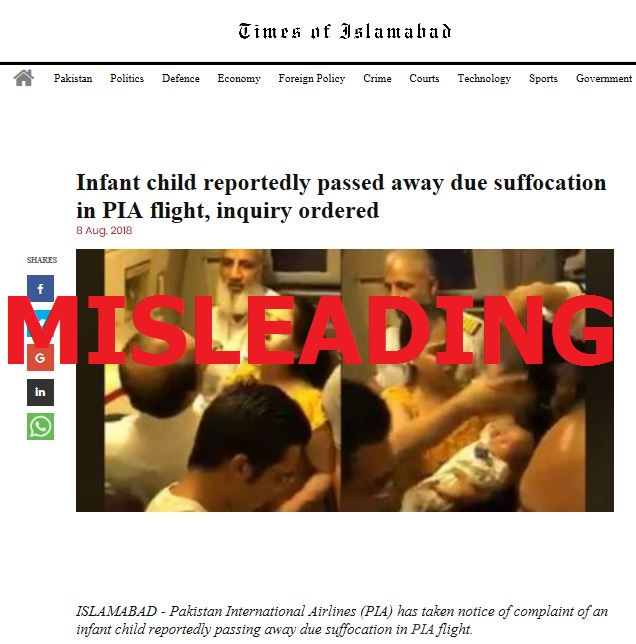 No, a baby did not die on board a Pakistan International Airlines plane from Paris

The headline of an online report states a baby reportedly died on a Pakistan International Airline flight due to suffocation. The baby survived, according to the airline and the text of the report.

The report was posted on the Times of Islamabad website on August 8, 2018.

The piece was run after a video of a mother pleading for help for her baby aboard the plane went viral in Pakistan.

The article, which Crowdtangle data shows has been shared to more than half a million followers, says the incident took place on PIA flight PK750 from Paris to Islamabad, which was delayed by two hours on August 3 after passengers had already boarded the plane.

The text of the Times of Islamabad report acknowledged that the baby survived.

The report noted that the airline had merely: “taken notice of a complaint” that the infant had died.

“However the subsequent report had revealed that the infant survived in the hospital and reportedly was out of danger after regaining consciousness,” the report said.

PIA also said in a tweet on August 9 that the infant had survived.

We are very happy to share that mummy and baby from flight PK750 are doing well. The CEO PIA sent his representative to meet with the family and also called to find out about their welfare. The inquiry for the incident is underway. Our passengers are important to us.#PIA #WeCare pic.twitter.com/FSDL7yghk7

UPDATE: The Times of Islamabad report referred to in this fact-check has been corrected following AFP's fact-check reporting, with its headline now stating: Infant child reportedly passed out due suffocation in PIA flight, inquiry ordered. Here is their new version.